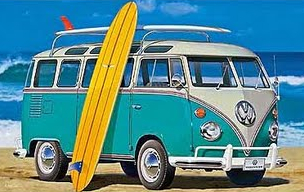 The iconic hippie transportation machine, the VW Bus, is going to die in December of this year—a bit of news that really harshes the vibe of certain people who dreamed of owning one, one of these days. If only we could scratch together enough bread to fix a vintage one up, you know, stretch its legs on Route 66. But alas, as all dreams do, that dream has died. Right? Because the prices on these things are about to skyrocket with all the "end of an era" hype around them.

According to the AP, the van was only still being made in Brazil, and now that "safety regulations mandate that every vehicle in Brazil must have air bags and anti-lock braking systems starting in 2014, and the company says it cannot change production to meet the law." The Man and his laws, always such a bummer. But the cult around the vehicle (which has been one of the most creatively transformed), and the fact that the company has produced more than 10 million since the model was created 63 years ago, will certainly keep them on the road for some time.

But perhaps we'll also see an uptick in school bus sales, the second choice in transportation for the hippie.

#bus
#magic bus
#van
#volkswagon
#vw
Do you know the scoop? Comment below or Send us a Tip