Visiting The Set Of 'High Maintenance,' Still The Best Show About NYC

Inside a class at Abhaya Yoga in Gowanus, a teacher is guiding her students through some of the typical breathing exercises in Kundalini yoga. But instructions on breath of fire soon turns to advice about dealing with mortality and long-term relationships. "No matter how comfortable something initially feels, everything eventually becomes uncomfortable," the teacher says. "That's why we have divorce lawyers."

Is there really such a thing as "divorce yoga?" There is in the world of HBO's High Maintenance, which remains the most intuitive, empathetic show on TV about what it's like living in the city right now. Through 19 web episodes and two seasons on HBO (the third season premieres Sunday, January 20th), it's become a wide-reaching portrait of NYC that is successful because it is familiar without being rote—as if you set up a camera in your own cramped apartment then passed it to your neighbor.

"It's like junior year of high school," Ben Sinclair said of the new season. Sinclair is the show's co-creator, along with ex-partner Katja Blichfeld; Sinclair also stars as The Guy, the bearded, zen-like pot dealer whom the show revolves around. "You know what's coming, you know not to procrastinate," he added. Having said that, that doesn't mean everything went totally smooth: when Gothamist went for a set visit in October, they were filming scenes for the fourth episode of the season, even though this was the second-to-last day of the shoot. They weren't able to produce the original fourth episode because one of the principal actors, who couldn't be replaced, fell ill.

Originally, that episode was going to follow an object around the city as it passed from person to person; instead, the episode they came up with follows a problem around an independent film set, with people passing off their own issues onto one another. "This episode depicts a lot of people acting like assholes, which is something that is appealing to me," Sinclair said.

"This was a fun one because Katja and Ben had to sit together and write it out last minute, which is super old school High Maintenance," said producer Russell Gregory. "The script came out really fast, and when we first read it, it was like, 'Oh wow. This is fun. It feels like the web series almost.'" Sinclair agreed: "We've pulled some of our most fun episodes out of a last minute writing session like this. I guess it's because we don't second guess ourselves as much." Based on his description, I was reminded of the old stories about John Lennon and Paul McCartney writing songs in the early days of the Beatles, "nose to nose" as McCartney has said. "I think we get along a little better than they did," Sinclair said with a laugh. 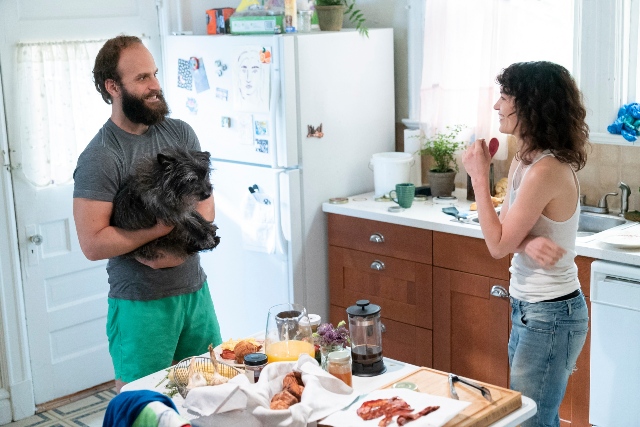 Sinclair and Blichfeld separated around the time of the second HBO season (Blichfeld publicly came out shortly after), which permeated the subtext of much of that season. The second season also saw The Guy in a darker mindset than we've ever seen him—contemplating his divorce, recuperating from an injury, getting ghosted by a casual girlfriend, and ending the season by taking an RV on the road. Despite their offscreen breakup, the two creators at least appear to have a healthy and fruitful creative relationship still, and they complement each other on set: Sinclair practically bounces around the room examining the sets and props (including a devil puppet he's hidden in every episode as a little Easter Egg) and talking to actors, while Blichfeld hangs back, acting as the calm, quiet-but-authoritative center of the production.

"This season, there's a lot of The Guy questioning: am I going to keep doing this thing all my life? Can I do this my whole life?" Blichfeld said, adding that this season will allude to him working less and spending more quality time with his "chosen family." "He's trying to figure out what the point of living is, really," Sinclair says, with Blichfeld completing the thought: "It's the thing that happens to a lot of people in their 30's."

As we watch the yoga scene continue, three key characters emerge: the yoga teacher (a recurring character played by Alexandra Auder, who previously appeared in season one's "Tick" and season two's "#goalz"), a woman named Lee (played by Britt Lower, she's introduced in the season premiere as The Guy's new potential love interest) and GIRLS actress Jemima Kirke, who is playing a version of herself (don't forget: GIRLS exists in the HM universe, as shown when The Guy stumbled upon Lena Dunham filming in Greenpoint back in season one's "Selfie"). 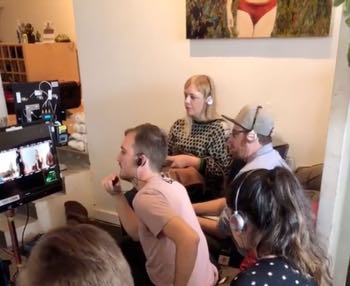 Jen Carlson and Ben Yakas on the set. (via High Maintenance IG)

Someone on the crew describes the scene as a "stitching point" that starts off the whole episode, hinging on a character we never see. Kirke and Lee, the focus of the shoot, had been exchanging loaded glances throughout the class. The yoga scene ends with the teacher and Kirke talking by a door while the others in the room, including Lee, clear out. As they go through a few takes, there is some banter about Louis C.K. which may or may not make the cut (in this fictional universe, Kirke worked on a film with him just before his scandal broke) and, more importantly, something about a mysterious sex tape.

As the show is wont to do, there are lots more familiar old characters who were brought back this season—some for this episode in particular, though we didn't get to see them film. "The whole idea is that New York City sometimes feels like a small town," Sinclair said of this episode, underlying the central thesis of the entire series. "You see how a lot of people are connected that The Guy delivers to you otherwise didn't know even knew each other. You see where they all intersect IRL, or in a different space."

That small town feeling extends to the crew, which consists of lots of locals who have been working on the show since the days when it was 10 minute shorts on Vimeo. Director of Photography Brian Lannin said that in the early days, it was just six or eight people making it on their own time. "We couldn't do something on this scale," he said. Being on HBO and having those resources "frees up the writing, so the world can expand, we can move to more locations. It was a labor of love in those early years, a group of people doing it once a month, whenever anyone had free time."

Makeup artist Sarah Graalman, who has been a part of the show since the second round of web episodes, explained why there is such retention among the crew: "It's what you hope work would feel like," she said. "All of us are New Yorkers, and who wouldn't want to work on a show that feels like it's really us?"