Visions for a New Coney Island 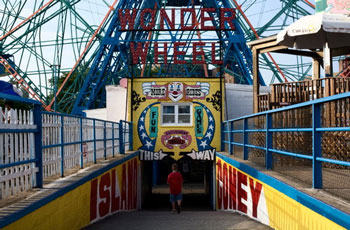 While the Bloomberg administration (and Thor Equities) ponder a plan to rezone Coney Island, the Center for an Urban Future asked some 23 influential figures how they would go about recreating the legendary amusement area.

From architects and historians to novelists and developers, everyone's 2 cents have been combined into a 22-page PDF (download here). Native Brooklynite and author Jonathan Lehman said: "Look at the Mermaid Parade. That’s a thing where ...people literally came together and created something there that connected to the deep historical meaning of the place but was also new and strange and fun. It wasn’t about anyone taking profit and there wasn’t an immediate beneficiary and it helped reinvigorate the city’s imagination of the place and made it exist again."

Atlantic Yards Report points out that "the single best idea...came from Lisa Chamberlain, executive director, Forum for Urban Design" who said, "One thought is to have an express train from Times Square to Coney Island and do some cross branding. Call it surf and turf. Times Square is probably one of the most visited place on earth. But at least now, Coney Island is visited almost exclusively by people from this region. Few tourists go there."

Meanwhile, the Municipal Art Society will be holding their design workshop tomorrow and Friday, in hopes of re-imagining Coney Island realistically.

#center for an urban future
#coney island
#Jonathan Lehman
#Lisa Chamberlain
#visions
Do you know the scoop? Comment below or Send us a Tip
A new Gothamist is coming! We’ve moved comments over to our beta site. Click here to join the conversation and get a preview of our new website.