The American Society for the Prevention of Cruelty to Animals has been working to rescue animals and promote their well-being for a very long time. So long, in fact, the non-profit is celebrating its 150th anniversary this year!

The ASPCA shared some incredible historical photographs from their archive, as well as some facts about the group's origins. It was founded after an encounter that New Yorker and American diplomat Henry Bergh had in Russia, in which he stopped a carriage driver from beating his fallen horse. Bergh resigned from his position and started the ASPCA in 1866, and the ASPCA's official seal features "an angel of mercy protecting a fallen carthorse from a spoke-wielding abuser." 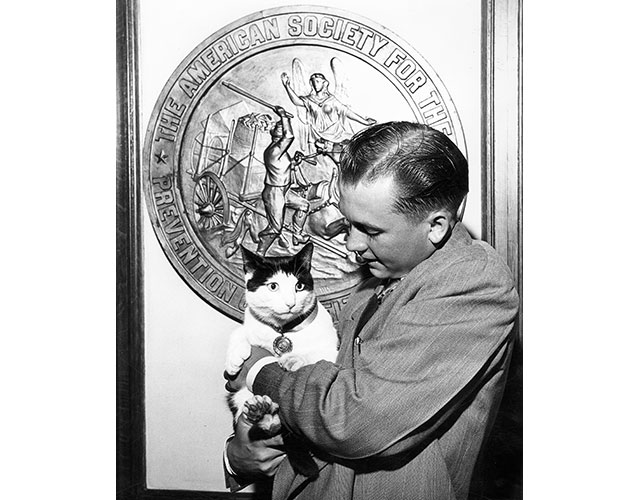 From the start, animal rescue has been at the heart of what we do—both in practice and on the ground. In 1867, the ASPCA operated the first ambulance for injured horses, a full two years before New York City’s Bellevue hospital put the first ambulance for humans into service. Eight years later, Henry Bergh invented a canvas sling to rescue horses; the sling would later be used on the battlefields of Europe during World War I.

Bergh faced an uphill battle from the start. At the time, America was not a friendly place for animals: workhorses hauled overloaded carts through the streets, dogcatchers were known to kidnap pet dogs and hold them for ransom, and dog fighting and cockfighting were common forms of “entertainment.” But Bergh was determined, and he founded the ASPCA on the clear belief that all animals are entitled to kind and respectful treatment and must be protected under the law.

Looking back, we now know that that Russian carthorse was the “first” in what was soon to be a long line of firsts. When founded, the ASPCA was the first and only humane society in the Western Hemisphere, and its formation prompted the New York State Legislature to pass the country’s first effective anti-cruelty law. Thanks to Henry Bergh, the world was rapidly becoming a better place for animals.

Bergh even pushed for horse drinking fountains around the city, including the one in Central Park's Cherry Hill. 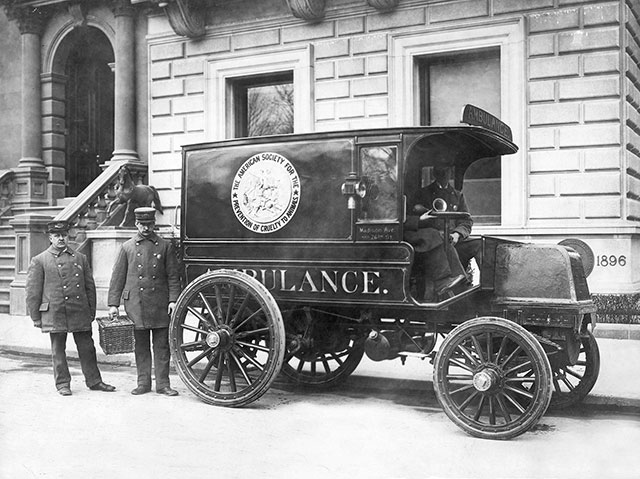 An ASPCA ambulance (Courtesy of the ASPCA)

His humane efforts weren't welcomed by all, however—the New York Historical Society took a look back at his place in the city's history, finding that he received death threats as he criticized mistreatment of animals and accused P.T. Barnum of exploiting animals (because "reptiles were fed live rodents in a public spectacle").

To mark this auspicious occasion, the ASPCA is holding anniversary events this Sunday: The first NYC Paws Parade at 11 a.m., starting at Madison Square Park and ending at Union Square, featuring the ASPCA, NYPD mounted and K9 units, the Mayor’s Alliance for NYC’s Animals, Animal Care Centers of NYC, shelter groups, and many dogs.

Then, there are two big Adoptapalooza adoption events with dogs, cats, and bunnies, one in Union Square (Broadway & East 17th Street) from 12 p.m. until 5 p.m. and another in Brooklyn at the House of Vans (25 Franklin Street) from 11 a.m. until 4 p.m.: Adoption fees will be waived (!), courtesy of Animal Planet, and adopters can also get free microchips and pet IDs for their new pets. And for you Marnie the Dog fans, she'll be at the Brooklyn Adoptapalooza!

Disclosure: My family adopted a kitten from the ASPCA last November. She has grown from a teeny little runt into an important scone-stealing, kale-eating, tent-squatting, super-silly and rather wriggly member of the family.