In a year when unqualified racists are getting White House jobs and beloved musical heroes are dropping like flies, it's important to find something good to hold on to (and to NEVER LET IT GO). In that spirit, I am very grateful this year to have seen Stephen Colbert and Seth Meyers (along with John Oliver and Samantha Bee, currently on hiatus) step up their game over the last six months and turn into must-watch late night TV that, while not solving anything, has at least provided some comfort in the vast darkness of the new political landscape.

Meyers took a closer look at Trump's conflicts of interests regarding his foreign business deals and also gave a sneak peak at Trump's immediate future (see photo above): "A bullying authoritarian who meets in secret with foreign leaders and receives gifts of gold? We’re probably a month away from Trump growing out a Saddam Hussein mustache," he said.

Colbert meanwhile went through Trump's media hissy fit, his backtracking on jailing Hillary Clinton, and the latest cabinet filings, including "albino Smurf" Senator Jeff Sessions, who may be the first politician in history to think the KKK is too chill.

And I just want to highlight this wonderful/horrible graphic proving how photogenic Trump truly is: 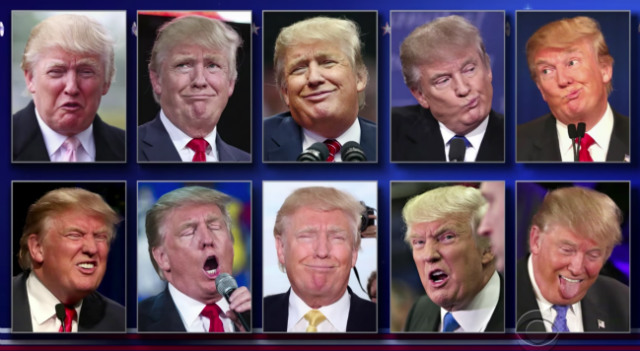