Videos: Radiohead's Hail To The Thief Is 10 Years Old 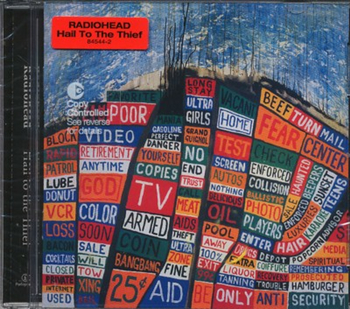 When I first heard Hail To The Thief I was in my best friend's car, it was raining, and we listened over and over and over again. I can't really tell you where I first heard many of the the albums I love, but for some reason that memory is so clear to me. She had somehow gotten a leaked version of it—which was a very new thing to us then—and we decided to listen to it in the best way possible to listen to music: driving in the car. We eventually stopped on the side of the road and kept it going on loop, probably around five plays in total. We had no idea before hitting play what direction Radiohead would be going in with their new stuff, but it all seemed just familiar enough and just far away enough from their previous albums—it was perfect.

We were in a sleepy town about 40 miles outside of NYC, where soon Radiohead would be playing a $2 Bill concert for MTV at the Beacon Theatre. (We didn't go to that, but Gothamist's John Del Signore did and I've been pestering him to tell his story about that night, which is pretty great.) Below, you can watch clips from that show.

This weekend, the album is turning ten years old. It has been called "quite jubilant," by Thom Yorke himself, and "exquisitely layered yet stubbornly minimal," by the NY times in their 2003 review.

When it was released, Yorke talked to Rolling Stone about possible political themes in the album and its title, telling them: "It was a formative moment—one evening on the radio, way before we were doing the record. The BBC was running stories about how the Florida vote had been rigged and how Bush was being called a thief. That line threw a switch in my head. I couldn't get away from it. And the light—I was driving that evening with the radio on—was particularly weird. I had this tremendous feeling of foreboding, quite indescribable, really. To me, all the feelings on the record stem from that moment." Though he says "we didn't write a protest record [or] a political record."

After finishing the tour for the album in 2004, the band members took time for their solo projects, and finally got back in to the studio to make In Rainbows, released in 2007. At the time, we talked to Jonny Greenwood, and you can read that interview here.

#hail to the thief
#radiohead
#original
Do you know the scoop? Comment below or Send us a Tip