Bruce Springsteen returned to Barclays Center last night to close out the U.S. leg of The River 2016 Tour—and possibly to retire The River entirely, revealing at the start of the evening that this was the last time they would play it in its entirety (it was unclear whether he meant for this tour, or forever). The show was one of the longest of the tour, with 36 songs spread over three-and-a-half hours (it ended a few minutes before midnight). It may have been even better than the show I saw at the start of the tour at MSG, with more varied setlist gems ("Loose Ends," "Trapped," "Boom Boom," "My Love Will Not Let You Down"), an extended seven-song encore, and glorious mic-crowding moment after moment.

And nobody was having a better time than NJ Gov. Chris Christie, who appeared to be sweating away some recent demons with every fist pump. He played air drums to "The Ties That Bind," he mimicked air guitar to "Sherry Darling," he banged his head to "Out In The Street," and he waved his magic fingers to "Born To Run," as you can see in the video below.

It was hypnotic watching his fist-pump to "Trapped," as if he could punch away the horrors of the last few months.

"Trapped: The Saga of Chris Christie and the George Washington Bridge" pic.twitter.com/gddbEZN0ju

There was dad dancing.

There was the aforementioned air drumming.

There was also one man standing in front of me who gave him the middle finger every chance he got:

Middle fingers up for Christie at Barclays for @springsteen pic.twitter.com/kirmarPwec

He also knew all the words to "Purple Rain," which Springsteen performed for the second time since Prince died.

I thought I saw Trump stooge Corey Lewandowski and celebrity chef Mario Batali in the crowd flanking Christie, but I may have just been writing fanfic in real time. These two people still look awfully familiar though. Let's make like CSI: Miami and ENHANCE: 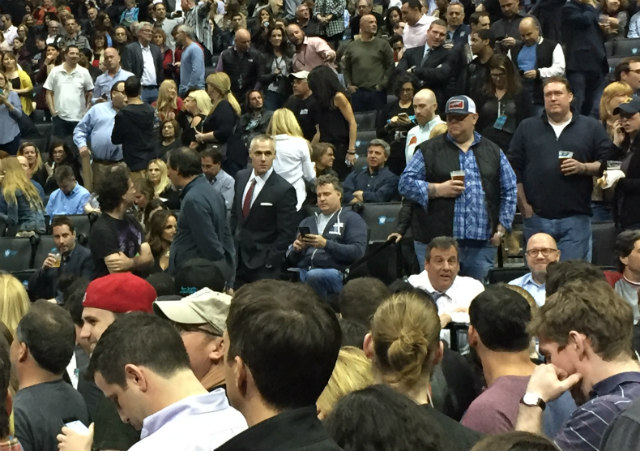 Who wears sunglasses and a trucker hat to a Bruce Springsteen concert?

He might be a political bully with backwards views on social reforms, delusions of grandeur (for real), and terrible taste in presidential candidates, but last night was a reminder that Christie is also a human being with feelings. I may disagree with him on almost all his politics, but watching him boogie down to Bruce completely un-self-consciously is the closest he's ever been to endearing. We should all be so lucky to be as happy as Christie was at the show (well, at least half the crowd WAS that happy).

I am currently at a Bruce Springsteen concert in eyeshot of Chris Christie. I've never seen such a display of such pure joy from one man.

And he very patiently and graciously shook hands and took photos with anyone who approached him throughout the night (and people were not shy about doing so). Even weirdos who approached him from behind, patted him on the back, and whispered in his ear that it smelled like farts in the arena.

I told him it smells like farts in here pic.twitter.com/KcGZXhYPsw

#barclays center
#brooklyn
#bruce springsteen
#Chris Christie
#dancing
#Music
#original
Do you know the scoop? Comment below or Send us a Tip