I've not been shy about expressing how, with a few exceptions, I've found the writing on this season of Saturday Night Live to be extremely disappointing and flat. It's somewhat unfair to compare SNL to a Netflix-based sketch show meant for a fraction of the audience, but watching something like Tim Robinson's hilariously absurdist, incredibly esoteric I Think You Should Leave really puts SNL's current blandness into stark relief. The two shows may be trying to do slightly different things (again, SNL is intended for a larger broadcast audience, which limits the amount of sketches one can do cursing out Bart Harvey Jarvis), but it also shares tons of writers and performers in common, and uses similar (pre-taped) sketch structures—so how come it seems like such a breath of fresh air compared to SNL in 2019?

This weekend's new episode eloquently sidestepped many of the problems that have dogged the show this season thanks to host Adam Sandler, who returned to Studio 8H to host SNL for the first time since he was fired back in 1995. And the show completely reconfigured itself around Sandler's particular (exquisitely silly) comedic style, with a few vintage '90s characters brought back, a few musical moments, a few brilliant understated sketches, and a dollop of sentimentality tying the whole thing together. Your mileage may vary on Sandler's unabashedly dumb sense of humor, but I found this to be one of the most purely enjoyable episodes of SNL this year, with nary a stinker sketch in sight. Lots to recommend below! 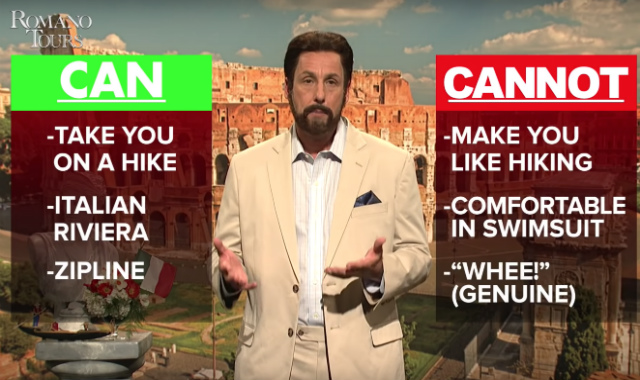 By far my favorite sketch of the night, and a definite highlight of this entire cursed season, was Romano Tours. Sandler wonderfully underplays his role as the owner of the tour company who patiently clarifies what his tours of Italy can and cannot do for customers.

You'll probably know whether this episode was or wasn't for you based on your reaction to Sandler's Monologue, which featured him performing the song "I Was Fired" in which he explains his SNL absence alongside Chris Rock and Pete Davidson, who I guess is the Sandler of the current cast (if Sandler only appeared in the background of one sketch a week). It could have been smug, it could have been lazy, but Sandler's undeniable charm worked for me: "Then I made over $4 billion at the box office, so I guess you could say I won."

As long as Kate McKinnon has been on the show, she's been having gross make-out sessions with various hosts as Kenan Thompson's bartender looks on in horror. That character Sheila Sovage returned in Last Call with Adam Sandler, which paired McKinnon, Sandler and Kristen Wiig (making one of two inexplicable cameos this episode). The best part of these sketches is now the cartoonish escalation of Thompson's reaction to all the kissing.

The most emotional moment of the episode came in the 10-to-1 spot, with Sandler singing his unabashedly sentimental and affecting Chris Farley Song tribute to his old SNL friend (which he performed on tour in recent years). If you haven't seen him perform it, and you have any love for Farley's larger-than-life comedy, this is something worth seeing—it's like Sandler's version of a Mark Kozelek song.

As for nostalgia, you can't really top Opera Man, who returned to Weekend Update for the first time in 24 years to sing about headlines including Game of Thrones, the 2020 presidential election, Seth Rogen, and Donald Trump's presidency. Sandler had a lot of old characters he could have brought back, and I'm glad it was this one—it was much better political humor than the usual SNL cold opens.

Rectix was another great instance of Sandler not going over-the-top or relying on silly voices. Kudos to Beck Bennett and Aidy Bryant as well for keeping this one grounded.

The entire cast got a chance to try out their best Sandler impressions for Sandler Family Reunion, with Davidson pulling out a particularly inspired Little Nicky (and Melissa Villaseñor's impression was great as ever). Wiig makes her other inexplicable cameo here, alongside musical guest Shawn Mendes (who was not born when Sandler was on SNL) and Jimmy Fallon—neither Wiig nor Fallon were actually on the show at the same time as Sandler, though Fallon impersonated Sandler as part of his audition.

There was no political cold open this week (see below), and War Zone Reporter, the first sketch after the monologue, seemed like it was going to fill in that gap... and then it became a goofy ode to silly snapchat filters. Honestly, I'll always take something like this over the painful cold opens.

So about the Cold Open: this was the first or second time this season there was no political or Trump-related content in the opening of the show. The show even acknowledged that with a little intro referencing Barr's no-show before the House Judiciary Committee.

Instead, we were thrown right into a Family Feud sketch featuring two things all Americans can agree on: Game Of Thrones and Avengers: Endgame. As with most Family Feud sketches, it was absolutely fine at best (Thompson as Steve Harvey is always a treasure), with a few standouts: Beck Bennett's Thanos makeup/costume made me laugh every time he was on camera, Kyle Mooney did a pretty good Bran, Thompson hilariously summarized Thor's quest as "some kind of white nonsense," and Leslie Jones as Groot was perfect.

The obligatory cut-for-time Kyle Mooney/Beck Bennett sketch Holes was another classic under-appreciated Mooney/Bennett joint... wait, it WASN'T cut-for-time?? It was actually in the episode?!? Holy shit, let's just appreciate that they got one on air this week, even if it wasn't their best.

But there was one cut-for-time sketch, and a surprising one at that: Chad's Journey, in which Pete Davidson's (only) original character meets his father (Sandler) in the afterlife and has a very unsatisfying game of catch.

Check out the rest of Weekend Update below, including McKinnon as a very saucy Elizabeth Warren who doesn't get why people aren't paying more attention to her incredibly detailed policy proposals: "I'm over here working round the clock to give you free college—but oh, looky there, Beto O'Dork did parkour in a Starbucks, wow!"

The musical guest was Shawn Mendes, who performed "If I Can't Have You" and "In My Blood," which both sounded like the kind of inoffensively catchy songs destined for a car commercial in six months.

#adam sandler
#saturday night live
#snl
#television
#tv
#original
Do you know the scoop? Comment below or Send us a Tip