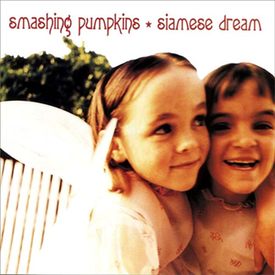 Twenty years ago tomorrow (July 27th, 1993) Smashing Pumpkins released their second album, Siamese Dream—it was one that propelled them further into rock stardom, and one that very likely haunts Billy Corgan to this day. In fact, we discussed that with him last year, and he told us, "I listen to those albums—they're working on the re-issues—I just roll my eyes and think, 'Oh god. I really was listening to this record at that time.' I can really hear it and it embarrasses me because I'm obviously being trendy."

But the world loved it, and loves it, and continues to want more more more ("Sentimentality is death"—Billy Corgan). It got the band their first Grammy nominations, and placed them on a number of Best Albums Of All Time lists. And if you were born in the '70s, you may or may not have lost your virginity to it. So many memories for everyone.

At the time, the Chicago band was tossed into the Seattle grunge mix, and Corgan said during an interview on MTV's 120 Minutes: "We've graduated now from [being called] 'the next Jane's Addiction' to 'the next Nirvana,' now we're 'the next Pearl Jam.'" At least Rolling Stone pegged them more as a progressive rock band, even if most of the world would just end up lumping all of these bands under the "alternative" label.

Below is producer Butch Vig discussing the record 20 years later ("Billy wanted to make a record that people would put on and say, 'What the fuck was that?' We wanted to have things going on in the left ear and right ear all the time.") And if you're wondering where the cover girls are, one was identified in 2007 as Ali Laenger.

And here's the band as they played their way through the 1990s—starting with their set at CBGBs in 1991.