Designers at the tiny storefront headquarters for Phoenix International Mas Band in Crown Heights have spent the better part of the year preparing for the West Indian Day Parade that takes over Eastern Parkway on Labor Day.

Spilling onto the sidewalk at the corner of St. John's Place and Nostrand Avenue—across from a new cafe called Colina Cuervo that sells $3 single origin pour overs—Ricardo Watson directs a crew of volunteers: high school students on summer vacation, and neighbors who work full time and pitch in when they can. Together they bend and wrap wire for gold tiaras and blue ostrich-feather headdresses, and hot-glue colorful gems to neon lycra bathing suits. Soca music blasts, and, as last-minute costume orders trickle in, spotlights illuminate the work tables all night long.

The West Indian Day Parade rivals similar summertime street celebrations in Miami, Toronto, London, and Washington D.C., and draws thousands of costumed dancers representing Trinidad and Tobago, Haiti, Barbados, and Jamaica. Bands including Freaks Mas, Boom Mas, and Phoenix spend months constructing elaborate costumes that range in price from $150 to $600. This coming Monday, the parade will wind its way to the Brooklyn Museum, where each band will cross the stage before a panel of judges and compete for cash prizes.

"When I shut down the shop right after the parade, you don't see me until October," said Watson, Phoenix's second-in-command. "I get back all of the sleep I missed." 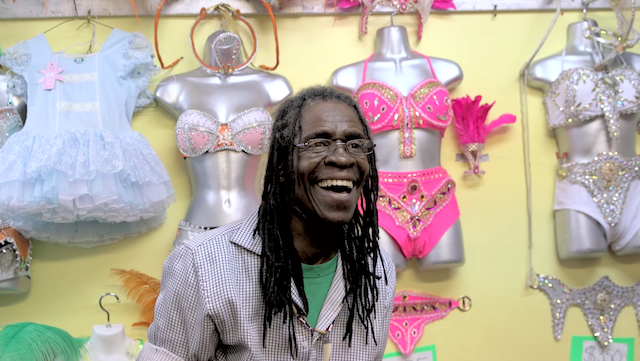 By last November, Watson was already hand-stitching wrist and ankle accessories, and bending wire frames that would eventually be headdresses and backpacks—elaborate feather-and-sequin costume pieces that slip over a woman's shoulders and frame her like a halo. Panamanian by birth, he has watched kids and grandkids grow up in Crown Heights. He recently developed carpal tunnel syndrome from decades of bending wire.

In July, Phoenix hosted a fashion show at Secrets, a nightclub on Nostrand Avenue, to debut new costumes and convince as many people as possible to buy them—the more buyers, the more money the band has for rent (Watson declined to share the exact amount), a DJ for the parade, and materials.

One pound of dyed ostrich feathers can cost as much as $600, and a packet of hot glue sticks jumps from $9 to $13 one week before the parade. For a band like Phoenix that doesn't have a corporate sponsor (many of them do), margins are thin. Watson makes halloween costumes and rents out the Phoenix storefront for kid's birthday parties, but it's not enough to profit. Often, when a friend can't afford a costume, he'll discount $50 and pay the difference.

"My pockets is empty right now!" he said. "We come out in the red. But it don't bother me one bit. We got to make money, but if we're doing something we like, we have to go with it." 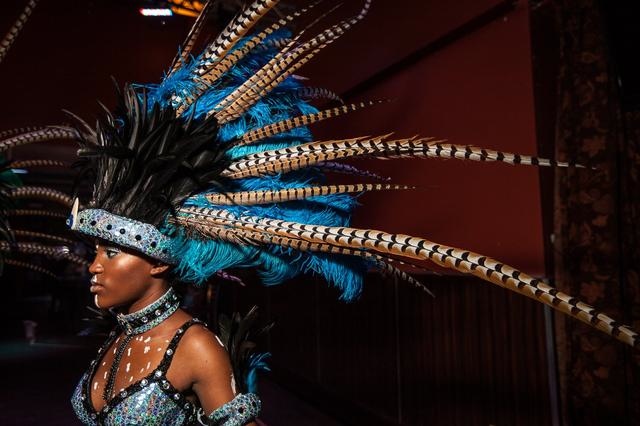 Phoenix was founded six years ago by a soft-spoken Crown Heights costume designer, Malcolm Phoenix. "Glam," he once said of his design aesthetic. "I love glam."

"Phoenix is a small band, and it do good for itself," said Watson. But between the pain in his hands and the changing demographic of the neighborhood, he's found preparing for Labor Day to be more challenging every year.

"I don't like to use the word gentrification, but in this neighborhood, it's gentrifying," Watson said. "You used to see a lot different nations with their flags, and now you don't see one. I don't have nothing against it, but this side of Eastern Parkway, you don't feel the vibes."

Phoenix usually marches 100 strong on parade day, but as of last week, only 20 dancers had bought costumes and were planning to participate. The band will march in 2016, but Watson himself is determined to retire come October.