Video: We Tried To Clean This Filthy Subway Platform

It was 11 a.m. on Tuesday morning and I was carrying a bunch of cleaning products over to the High Street station in Brooklyn. It smelled heavily of bleach, thanks to the Clorox Clean-Up All Purpose Cleaner (with Bleach) in my purse. I kept imagining passing some cops and them catching a whiff and, somehow, knowing exactly what I was up to: cleaning the subway platform with the one and only Jeff Seal. Which...probably isn't illegal?

Last year, I had an idea to create a series called CLEANING NYC, and today we finally embark on our adventure to scrub (or document the scrubbing of) the grease, grime, and sins off this dirty town. We can't clean it all, but at the very least, we'll get a satisfying before and after image. The most easily achievable of the things to clean on our list was a subway platform, and last week when Governor Andrew Cuomo released a photoshopped image of this very thing during an aggressively goofy powerpoint presentation, I took it as a sign.

Accompanying Cuomo's image was a comment from him deriding the MTA for their alleged choice in cleaning product. "My favorite MTA decision — because you have to laugh, otherwise you cry — is the one they made to pick a product to clean the subway stations," he said. "What product did they pick? Tide. Yes, the same Tide detergent you use at home to wash your clothes. If it’s got to be clean, it’s got to be Tide."

However, I'm pretty sure Tide—or any other cleaning product—has never touched any surface of the High Street subway station. Its platforms are so impressively caked in [we'll let you know when we get the lab results back] that it rivals the one patch of dirt left on the ceiling of Grand Central. Was it decided that the High Street platform shall never be touched for preservation purposes? Is it being used as a control station to see how dirty things could get if we never cleaned them? Is it just that we have other shit to spend money on that's more important than a sparkling clean subway platform? One of those things is probably true.

So there we were, looking down at our chosen section of platform, hoping to reveal what was at the bottom of these layers of grime. We guessed the first coating was from the '70s, at least, but this could go back as far as 1933 when the station first opened. The dirt is really baked in there—so much so that the surface seemed impenetrable. No amount of elbow grease seemed like it was going to make a dent, but Jeff got down there and gave it a shot. 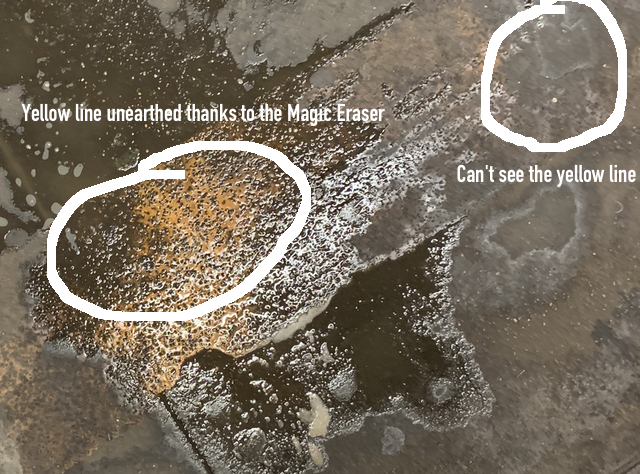 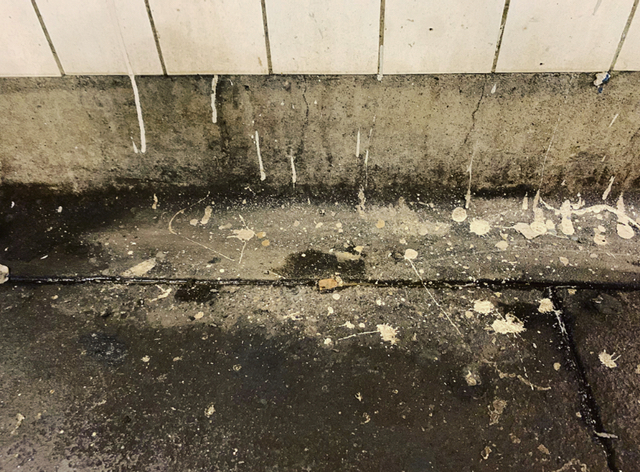 Once again, the Magic Eraser got through the grime here and uncovered some previously covered paint splatters. "We uncovered a Pollock!" Jeff exclaimed. (Gothamist)

While we didn't bring Tide, we did bring the aforementioned Clorox, a scrub brush, rubber gloves, some Mr. Clean Magic Erasers, a Scrub Daddy, paper towel and bottles of water. (Our Simple Green did not arrive on time, and we were unable to find it at a nearby store.) Here's what we learned: most likely, literally anything can help in cleaning the subway to some degree. This platform is so thirsty for cleaning product, it'll soak it right up and come undone at first contact with a scrub brush. While the Magic Eraser worked the best, they fall apart within seconds of scrubbing, so these are unrealistic for cleaning the entire subway system unless Mr. Clean can make some industrial strength version.

In the end, our recommendation is a commercial pressure washer, which was not in our budget. 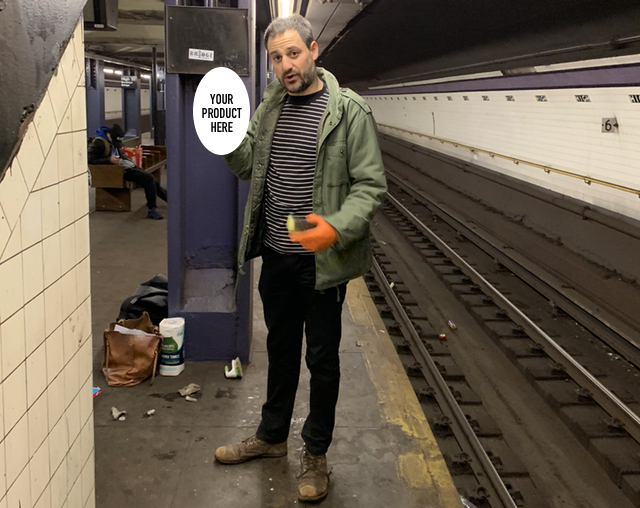 We've reached out to the MTA to find out how, and how frequently, subway stations are cleaned. Back in 2017, Untapped Cities spotted some cleaning in action at the Canal Street station, noting workers were using brooms, mops, and "high powered water cannons."

#cleaning nyc
#cleaning nyc with gothamist
#jeff seal
#MTA
#subway
#we the commuters
#original
Do you know the scoop? Comment below or Send us a Tip