NYPD officer Clinton Philbert was out of uniform. Wearing a sheeny black and white ruffled costume (with gruesome mask to match), the young cop looked ready to walk into the role of a demonic referee and/or Insane Clown Posse rhythm guitarist. In fact, for the next two days it's Philbert's off-duty mission to dress this way, as he leads groups of children and adults through the new haunted house constructed in the basement of Brooklyn's 78th Precinct stationhouse in Prospect Heights. "I have a great time," he said, "and hopefully we'll be able to scare a lot of people."

Philbert is one of a dozen NYPD officers who are helping to bring the 78th Precinct's haunted basement to life. Brave attendees can expect to encounter masked ghouls jumping out of corners, children's dolls covered in gore, severed limbs, and an electric chair scene that's notably terrifying. In one room, a chained mannequin has been completely disemboweled in a bathtub; plastic guts and a bloody sawzall fill an old bathtub. It seems the police, when they let their imaginations run wild, are pretty damn good at Halloween.

"The reason we're doing it is 90 percent of people come into a police precinct for bad things, they don't come in for good things," said Captain Frank DiGiacomo, the Precinct's commanding officer. "So we want to get the kids and teenagers—come meet the police, come into the station house for something good like a haunted house and meet the police officers...who've given their own time to scare them and introduce and meet them." 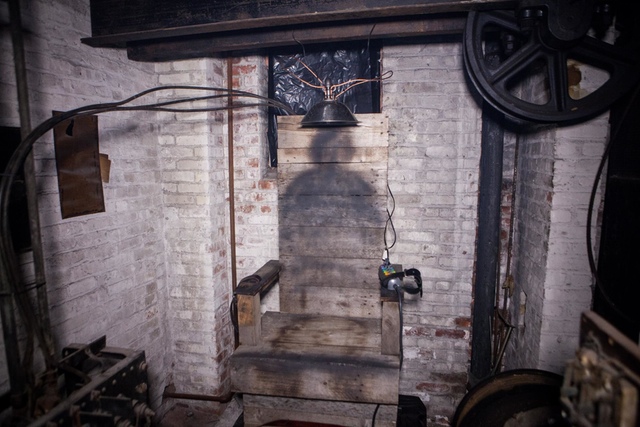 DiGiacomo has made the Halloween decorations a passion project for the 78th, which patrols Park Slope, Gowanus, and part of Prospect Heights. When he mentions the month of volunteer work his officers put into the haunted house, he beams.

"They love it. Most of them gave their own time. They come in on their days off to help do this, help clean and help make the haunted house very scary." After being transferred to the 78th Precinct a year ago, the Captain learned the building's basement hosted haunted houses nearly a decade ago, and so DiGiacomo made up his mind to clear out the space, once again making it a home for spirits and skeletons.

The basement is set up as a winding maze, with blind corners leading to grisly figurines or masked off-duty officers, ready to pounce. Some walls are lined with chopped-up limbs, and the entire house has a prevailing horrific-child-massacre theme. Chalked on one room's floor is a pentagram-style badge, complete with skull and a "78" insignia. Another, separate "kids' room" in the precinct houses friendlier witch and ghost decorations as well as a DJ, who will presumably be spinning "Thriller" and "Monster Mash" on repeat for hours on end.

After leading us safely through the cop crypt and back to the station house waiting room, Officer Philbert carefully pulled off his demon clown mask; underneath he was drenched in sweat and smiling.

#gothamist films
#halloween
#haunted house
#nypd
#original
Do you know the scoop? Comment below or Send us a Tip