Video: The Hidden Staircase In The Center Of Grand Central

During our recent exploration of Grand Central, we learned about the Terminal's staircases—the two on either side of the main concourse, and the one that's hidden from the public eye, right in the center of that same floor. We'll start with that one.

While it looks pretty dingy below, the information booth is famously topped with an extremely valuable clock. The four-faced timepiece, crafted in 1913, "has an often-quoted value in the tens of millions of dollars due to its history, artistry, fame, and jeweled faces," which are all opalescent glass.

Look east or west and you'll see two other staircases, both out in the open. They have a secret, too—Brucker told us that when the terminal was built, there was only one staircase, which was modeled after the one in the Paris opera house. It wasn't until the 1990s that a duplicate staircase was made... well, almost duplicate. Brucker says, "The old staircase is one inch smaller from the [newer] staircase, so that hundreds of thousands of years from now archaeologists discover this place, they’ll know, they were not put in at the same time." 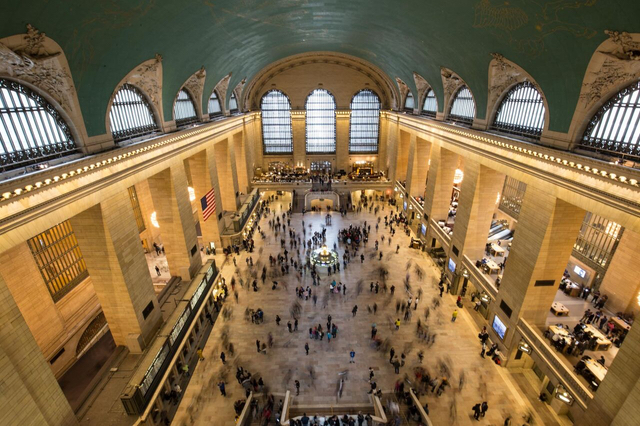 The new one is on the east side, and since original blueprints called for two staircases, the plans got through the Landmarks Preservation Commission. From a 1994 the NY Times article regarding the second staircase, which was only just being proposed (it wasn't complete until 1998):

Philip Johnson, the architect, a leader in the fight to preserve Grand Central in the 1970's, said yesterday: "It's a logical way to complete the Beaux-Arts approach to architecture, which was symmetry. And it brings back the balcony level into some sort of usefulness."

The plan is "responsible and imaginative," said Kent L. Barwick, president of the Municipal Art Society. " 'Excelsior!' is our general reaction," he added.

Though there was some concern about changing Grand Central, the article noted that the MAS had actually yet "to take a position on the staircase and is concerned that the balconies not become a private preserve of restaurant patrons. 'You shouldn't have to book a table to get a view,' Mr. Barwick said. 'There still ought to be a place—not to romance this too much—where a lonely sailor can go and look down.'" Well, anyone can enjoy the Apple store.