This week Stephen Colbert called upon Banksy to bring one of his priceless street art pieces to the wall of The Colbert Report during the street artist's time in New York. Or rather... tempted him not to: 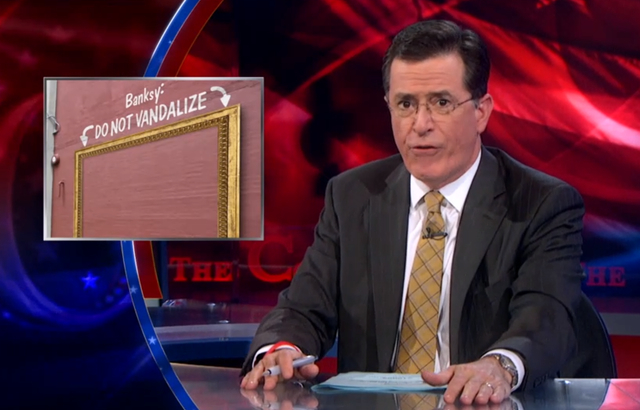 The next morning he woke up to an original piece by... Hanksy (which we spotted yesterday morning). Last night, he addressed the addition to his studio building wall:

"Imagine my surprise this morning when I discovered this incredible work of art. I don't know what's more impressive: how he captured my likeness, or how he knew what I look like before I body wax. At first I thought this was Banksy, but it turns out the work was signed by Hanksy. Who evidently is a well known New York street artist, whose work uses celebrity iconography to address the ephemeral nature of fame, specifically with terrible puns. His other works include Hamuel L. Jackson, Gandalfini, and Meth Rogan. Powerful stuff, really makes you not think.

Now here I assume I am Stephen Col-Grizzly. But like Banksy, Hanksy's identity is a mystery. I think I cracked the code because Hanksy's first street art featured Tom Hanks, who happened to be my guest last night, which is when the lightbulb went off..."

We reached out to Hanksy for confirmation on this startling discovery and will update when we hear back.

UPDATE: Hanksy has responded: "Welp. Now that my identity is revealed, I want to remind everyone to go see my movie Captain Phillips, which opens nationwide, today."

#colbear
#hanksy
#stephen colbert
#street art
Do you know the scoop? Comment below or Send us a Tip