Video: Step Inside This Haunted Staten Island Mansion, IF YOU DARE Every Halloween, faux-haunted mansions—some that deliver, and some that certainly do not—open their doors for those jonesing for an ethereal thrill. But if it's an IRL Murder House you seek, you'd do well to stop by the Kreischer Mansion on Staten Island. The 130-year-old Victorian home is supposedly one of the most haunted spots in town, and even if you don't buy the stories about lurking ghosts, the house's blood-spattered history is macabre enough to creep you out.

We tiptoed around the mansion earlier this week and are now plagued by visitors from the spirit world, and since you clicked this link, now you are too! Just ignore the little girl with greasy hair crawling out of the computer screen—she promised us she won't kill you until you've finished watching the above video.

The mansion was built by Balthazar Kreischer, a Bavarian immigrant who launched successful fire-brick manufacturing company in the mid-19th century. Kreischer died in 1886, just one year after his home was completed. And that's when things got a little strange: "There was greed, there was some sort of intrigue, infidelity," Nicholas Georgianis, a local historian and Kreischer Mansion superfan, told us. "Nobody knows for sure, this was all so long ago. I don't know if they murdered each other or not but it was very strange. There'd been a lot of talk about one of the sons wanting to take the business, it's something out of a Shakespearean novel, which, in those days was kept hush hush, today would be all over the media."

Indeed, his sons, Edward and Charles Kreischer, reportedly fought over the company, with the former dying "mysteriously,"—rumor has it he shot himself in the head in the house after one such argument with his brother. Later, a second mansion the elder Kreischer had built for son Charles burned down, apparently killing both Charles and his wife. 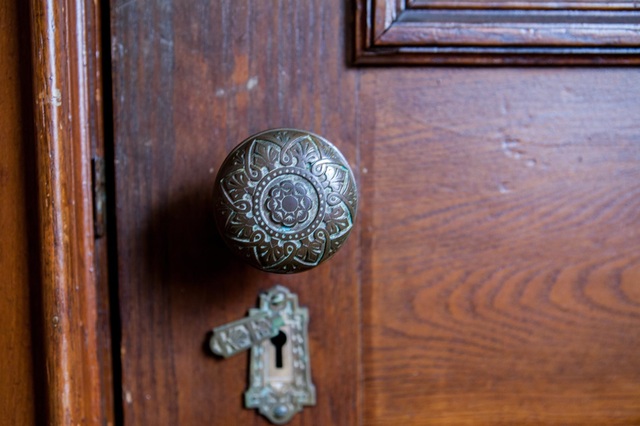 Locals claim the house is haunted by a whole slew of spooky spirits, including the ghosts of both Kreischer sons, a German cook, and some small children who were locked in closets, because ghost children are the scariest. Supernatural habituates aside, the Kreischer Mansion also served as the setting for a grisly mob hit in 2005, just a few years after it was purchased by developer Isaac Yomtovian. The house's caretaker, Joseph Young, was convicted of killing Bonanno family associate Robert McKelvey in a manner befitting a Grimm brothers tale.

"First they tried to drown him, and it didn't work," Georgianis told us. "Then they took him downstairs and brutally stabbed him. And then after he passed on, they took the body and chopped it up and burned it downstairs where the kitchen used to be. It was not like 1,2,3. It must have taken a couple of hours."

Keeping that charming bedtime story for future serial killer children in mind, note that the house is for sale to the tune of about $11 million dollars. And though it's a lovely piece of property, complete with an attic, turret, two sheds and a [murder] basement, it's probably not the kind of place you'd like to spend the night if you're not already a White Walker. "It's creepy," Georgianis told us. "They've done paranormal investigations here. It's been said that the souls of the Kreischers are still here."

If you'd like to scope out Kreischer House on your own, a $40 ticket will get you entry to a SpOoKy event at Murder Mansion on Halloween night, complete with dancing, drinks, pizza, ghoulish actors, eerie fog, and for an extra $20, a seance "experience"—transportation included! If you're lucky, you'll wake up in bed with a hangover and the ghost of a minced mobster come Sunday morning.

#ghosts
#ghouls
#gothamist films
#halloween
#kreischer house
#murder
#staten island
#original
Do you know the scoop? Comment below or Send us a Tip