Fiorucci, a fashion label founded by Elio Fiorucci in 1967, became popular amongst New Yorkers (and trendsetters like Madonna and Andy Warhol) in the 1970s and early 1980s, after the East 59th Street store opened (right next to those squares at Bloomingdale's). The store was filled with glitter, gold, lamé, and skin tight jeans—in 1977, a year after the New York flagship opened, NY Mag ran a lengthy piece on the scene, noting, "All it took this year to achieve instant chic, day or night, at the slickest New York party or the trashiest, was a pair of $110 gold cowboy boots from Fiorucci." 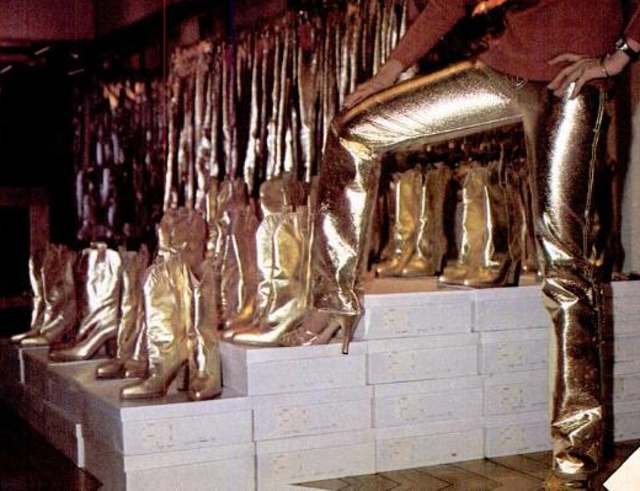 In its heyday, a then-unknown Madonna performed at the store (some credit it for launching her career); Keith Haring exhibited his artwork on its walls; Warhol held the launch party for Interview there; and graffiti artist Kenny Scharf held his first solo exhibition there.

Known to some as the "daytime Studio 54," they closed up shop in the late '80s, but staged a comeback in 2001 (though many of the original scenesters voiced their skepticism). The store opened on lower Broadway, but didn't bring any of that old magic with it. That year, the NY Times talked to Betsey Johnson, who said, ''Fiorucci was the most happening place. It never stopped being happening—it just left New York City, because I don't think New York City was happening enough by the mid-80's, with AIDS and everything. It's a great sign for me that it's coming back.''

Check out video from the store in its heyday, featuring Warhol, Truman Capote, and some of the store's employees.

#fashion
#fiorucci
#flashback
#history
Do you know the scoop? Comment below or Send us a Tip