As hundreds of tourists and art lovers enjoyed the Guggenheim's evening of free admission last night, scores of activists briefly took control of the museum, blaring a bugle, dropping banners from the spiral balconies, and raining leaflets on visitors.

The activists, affiliates of the Gulf Labor and Occupy Museums groups, were calling attention to the construction of a new Guggenheim branch on the artificial Saadiyat Island in Abu Dhabi. The emirate is pouring money into a massive project to bring western cultural institutions to the island, including the Louvre, and the controversial New York University branch.

The issue, Gulf Labor contends, is that the actual construction of these institutions is effectively being done with indentured labor—migrant workers brought into Abu Dhabi from South Asia under the country's exploitative sponsorship program, which prevents them from bargaining, organizing, or even leaving the country without their employer's permission. According to numerous reports, the workers are forced to live in fetid, overcrowded camps located near open sewers. Laborers with serious injuries are ordered back to work and are assaulted or threatened if they complain to the authorities. Media coverage of the conditions is beginning to intensify.

"It's a challenging problem," said Andrew Ross, an NYU professor and a founder of Gulf Labor. "It's similar to what Nike said [when it was challenged on labor conditions]: 'We're not in control of the supply chain.' Well, we don't have leverage in Abu Dhabi. But we can put pressure on the institutions here to be responsible."

After slowly dispersing through the museum, the activists sprung into action at 6:45 p.m., unfurling mylar banners with slogans like "1% Museum" and chanting "Who is building the Guggenheim Abu Dhabi?"

Bemused visitors stopped in their tracks, pulled out their camera-phones, and wondered what was going on.

The action ended after roughly 20 minutes, and museum-goers reacted with a substantial round of applause. Some approached the activists to ask for more information.

The museum guards were less impressed, tearing down the manifestos and berating the activists for their disruptive behavior. Police were soon on the scene, helping the guards escort the protesters off museum property. 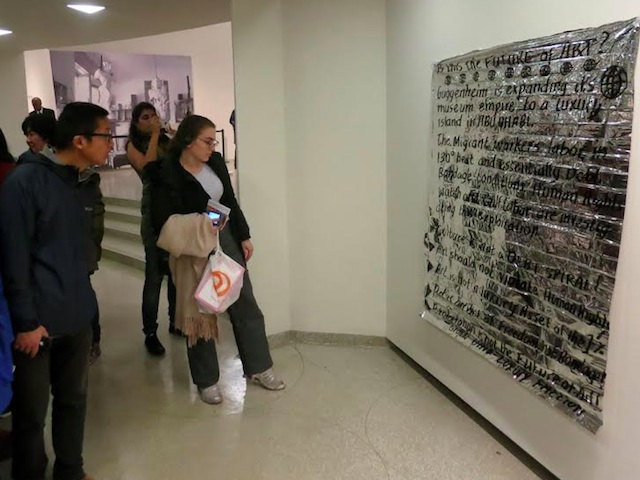 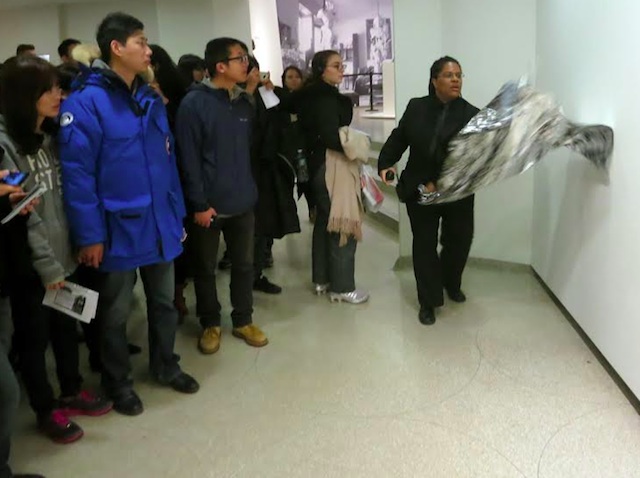 "Ten dollars an hour, and you make us put up with this?" one guard shouted at the protesters as they were ejected. "If you did this another way, I would have been marching with you.” Visitors still in line for the museum after the protest were told it was making an unscheduled early closure.

Calls and emails to the Guggenheim’s press office were not immediately returned.

Last night's event is just the first of many the group is planning in the city to target the Guggenheim and NYU, Ross said yesterday. On Wednesday, the group is hosting a presentation at NYU by Nick McGeehan of Human Rights Watch on migrant labor conditions in Abu Dhabi.

The Solomon R. Guggenheim Foundation is engaged in ongoing, serious discussions with our most senior colleagues in Abu Dhabi regarding the issues of workers' rights. As global citizens, we share the concerns about human rights and fair labor practices and continue to be committed to making progress on these issues. At the same time, it is important to clarify that the Guggenheim Abu Dhabi is not yet under construction.

#Abu Dhabi
#nyu abu dhabi
#protest
#questionable labor practices
#the guggenheim
#original
Do you know the scoop? Comment below or Send us a Tip