On Saturday night a group of protestors showered visitors of the Guggenheim Museum with literature designed to raise awareness of what they claim is the museum's use of indentured servants to build a satellite structure in Abu Dhabi. Shortly after the protest, the museum was closed to visitors seeking the "pay what you wish" admission price traditionally featured on Saturday evenings, and the NYPD arrived to maintain order.

The protesters were part of the Global Ultra Luxury Faction (GULF), an offshoot of another group called Gulf Labor. Both groups were involved in a similar action at the museum last month.

Guggenheim32914 from Gothamist on Vimeo.

Yesterday the New York Times published an op-ed by Andrew Ross, an NYU professor and member of Gulf Labor, in which Ross describes how "tragically underpaid and ill-treated migrant workers" are building structures for the Guggenheim, the Louvre, and NYU on "the mother of all luxury property developments," Abu Dhabi's Saadiyat Island.

Gilbert Tseng, who was visiting the museum from Los Angeles, said he was familiar with the controversy before the protesters began dropping dollars marked with phrases like "What Does An Ethical Global Museum Look Like?" and "Shit Is Fucked Up & Bullshit."

"That region has a lot of labor issues, it's certainly important," Tseng said. "But this sort of protest—you're just effectively annoying the museum staff."

This was true. Security guards prevented me from speaking with other visitors inside the museum, and a group of NYPD officers escorted me off the premises. 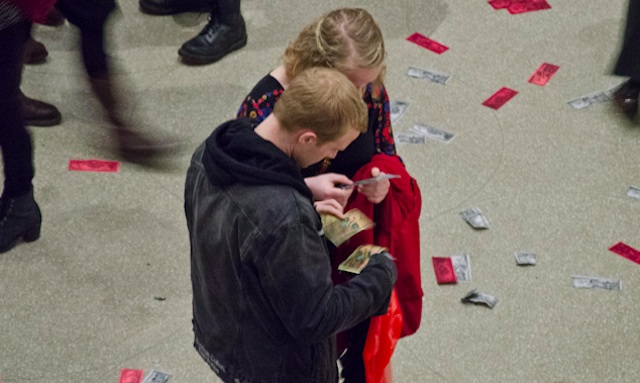 Outside the museum, Hilarie Faberman, a curator at Stanford's Cantor Arts Center who was visiting from San Francisco, told me she found the protest "charming."

"It was a juvenile, Dada, Futurist act," Faberman said, referring to the Guggenheim's current exhibition on Futurism. "If you know anything about these movements, their tactic was to shock. I thought [the protest] wasn't destructive. I liked it."

Faberman, a former NEA fellow who worked at the Guggenheim in the late '70s, said she was troubled by the increasing dependency of art institutions on their wealthy patrons.

"It's all about the money and the greed, and not about the artists. The Koch brothers and all that philanthropy pumping money into the arts, it makes me sick. But without their money, there wouldn't be the funding, so what can you do? This is a great museum."

Faberman added that a friend was currently working on curating modern art at the Guggenheim's Abu Dhabi complex, which is still in the early stages of construction, and that the friend had no trouble securing money for works from new artists.

"But I still don't know why they're building it. I'm not a 6'3" male with family ties, so I don't know what the leadership at the Guggenheim is thinking."

In a statement, the Guggenheim Foundation said it is "currently engaged in ongoing, serious discussions with our most senior colleagues in Abu Dhabi and TDIC, the authority responsible for building the Guggenheim Abu Dhabi museum, regarding workers’ rights. Our chairman of the board of trustees and director have just recently returned from meetings in Abu Dhabi where this issue was a top priority for discussion."

It is important to clarify that the Guggenheim Abu Dhabi is not currently under construction, despite erroneous claims by certain protesters. The building foundations and pilings were completed in 2011. While in Abu Dhabi in mid-March 2014, our director revisited the workers village to ensure that living conditions for workers who will work on the Guggenheim Abu Dhabi will set new and respected standards for workers engaged in building other projects on Saadiyat Island.

A website created by protesters designed to resemble the Guggenheim's announcing a design contest for the satellite structure based on the "principles of sustainability, equity, and accountability" was denounced by the Guggenheim as a "hoax."

"The Guggenheim Museum should push to abolish the recruitment debt system, ensure that workers are paid a living wage and legalize the right to collective bargaining," GULF said in a statement released after the action.

Alex Olson, a 16-year-old visitor from Miami, said she wasn't aware of the shrine to Western culture being built on Saadiyat Island prior to the protest.

#Abu Dhabi
#art
#dubious labor practices
#guggenheim
#NYU
Do you know the scoop? Comment below or Send us a Tip