Ouija is a forthcoming film about a smokin' hot group of friends trying to communicate with Debbie, a fellow smokin' hot friend who was fatally hung from her ceiling with a set of string lights after unwisely tinkering with a Ouija board she found in her creepy old house. Everyone agrees that trying to communicate with Debbie is a crap idea, but they do it anyway, and the rest of the trailer is composed of all the standard-issue scares: Doors slamming, battered dolls, one girl's mouth being sewed shut with floss. Everyone has great hair.

Its creators must have known that Ouija would not succeed on the strength of its tired premise alone, which is why they brought in Thinkmodo, a viral-marketing agency responsible for such past pranks as the Carrie coffee shop and the utterly grotesque demon baby.

This time, they took over a wine shop in Lefferts Gardens, found a game co-conspirator gifted with eye proptosis (do NOT Google Image search this) to act as a fortune teller, and, for added flourish, deployed an actor caked in gray makeup with stringy corpse hair to crash up through the floor.

Victims were baited into the shop with a chalkboard sign that said "Free Reading Today, Just Walk In!" Plenty did. Less known is how many soiled themselves after the "psychic," played by Jalisa Thompson, pushes her eyes from her head while yelling RUN! as the bonus ghoul springs from beneath the floor. 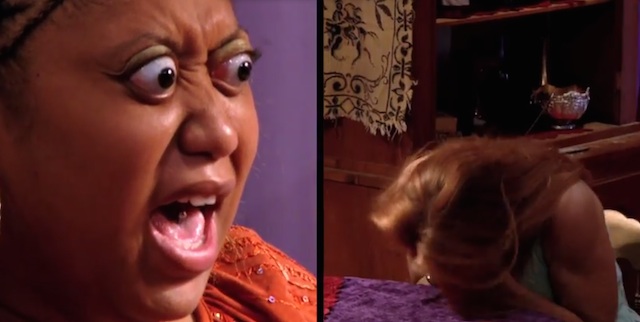 This will not save you.

The reactions were uniformly satisfying. One woman accepted her fate almost instantly, burying her face in her hands in a clear gesture of surrender. Another was so desperate to back her chair away from the spectacle that she toppled right out of it. Some freaks even promptly identified it for the joke that it was, clapping their hands in glee. (Freaks.) The movie may or may not be dreadful, but at the very least, this guy's eyebrows deserve their own agent. 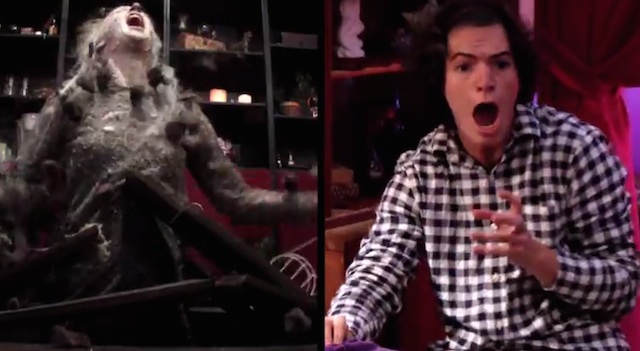