Research has shown that pets can help reduce your anxiety—and last week, Gothamist staffers put that theory to the test, collectively attaining a state of Nirvana when four puppies and a kitten from the North Shore Animal League America visited the office. P.S.: Did you know that holding four puppies is really, really hard work?

About 7.3 million cats and dogs enter rescue shelters each year, with over a third of them being euthanized due to overcrowding. This is where the North Shore Animal League America steps in: as the largest no-kill shelter in the world, they coordinate with overcrowded shelters and rescue groups and bring the animals to their Port Washington, Long Island facility. They then work throughout the year to raise awareness of how wonderful—hello, Kitten Bowl! aww, fave that Instagram picture—and adoptable—you've seen the Mobile Adoption Centers—these animals are.

Ronald Martorelli, a Quality Control Manager at North Shore Animal League America, chatted with us about adopting rescue animals, as we cooed and cried over eight-to-10-week-old hound mix puppies Bentley, Emma, Harley and Missy, and three-month-old kitten Prichard. Keep in mind, puppies and kittens are a lot of work—and older pets are more chill.

For those of you who are unsure if you can handle the awesomeness of being a rescue animal's human, you can always foster animals and see if they fit into your lifestyle. 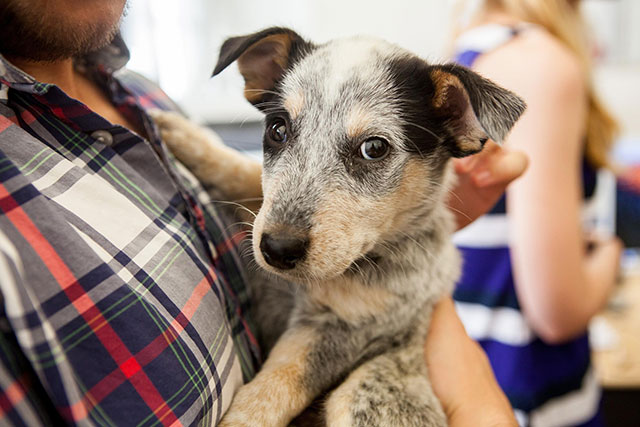 This fall, the North Shore Animal League America is encouraging everyone to "Get Their Rescue On" and donate to GetYourRescueOn.org. With a $25 donation, you get a stainless steel cuff—they encourage you to wear it, take a selfie with your rescue and share your rescue story on social media with #GetYourRescueOn. Get Your Rescue On is also the theme of North Shore's annual gala (Amy Schumer is performing!). Even if you can't go to the gala, you can donate to help build a second floor to increase the North Shore Animal League's building size and capacity for more animals.

So far, North Shore Animal League America has rescued over a million cats and dogs, and every time someone adopts a rescue pet, two animals are saved: the one just adopted and the one that will take its place at the shelter. And already, one of the puppies that visited us has been adopted: Emma, now Artie, has a forever home with PIX 11 weather anchor Linda Church! Awwwww:

You’re looking at the moment @lindaleechurch met her newest furry family member. On Friday, we featured North Shore Animal League and the animals they have up for adoption as part of the #GetYourRescueOn event and Linda just fell in love with this cutie. Her new name is Artie and we can’t wait to watch her grow as part of the PIX11 family. Congratulations, Linda! And welcome home, Artie. 😍🐶