Video, Photos: Drift Away With This Delightful BYO Boat Concert On The Hudson River

On a balmy evening in June, a loose collection of people started arriving on the banks of the Rondout Creek in Kingston, NY, where they began unloading canoes and kayaks into the dandelion fluff-speckled water. After some listless floating, a gold lamé-jacketed man with a tuba appeared on the deck of a houseboat. He gave some safety guidelines for the night ("drinking and driving rules apply on the water") and a rough route, before a kayak adorned with lights and a glowing koi fish on a pole led the floating procession in the direction of the Hudson River. From the bow of one of the kayaks a small dog in a life jacket peered out skeptically.

This was the fourth year of this casual BYOB (bring-your-own-boat) concert on the water, organized by Hudson Valley residents Adam Katzman and Chris Wetmore, and headlined by well-known NYC banjo-slinger Morgan O’Kane. On the way to the main stage (a floating platform piloted by an electric trolling motor) the Hobophonium Brass Band provided a playlist of music, which poured out of a collection of old brass instruments that almost filled a canoe, each of which had been retrofitted with a speaker inside the horn to broadcast music from a wireless transmitter. The result was a wafting instrumental soundtrack to paddle to, as the last of dusk dissolved into night.

Just after passing underneath the first bridge and rounding the tip of a peninsula, the sound of a banjo and vocals with a bit of holler in them drew the audience’s attention to a four-piece band, lit up and floating on the main stage in the middle of the river. O’Kane stood aboard, accompanied by Zeke Healy on guitar, Tianna Kennedy on cello and Hayden Cummings on upright bass. The assorted couple dozen boats all swarmed the stage and floated politely around as the band performed, the occupants occasionally paddling in reverse to allow arriving members of the crowd to get a closer look.

Part of the attraction of the night, of course, was the novelty of a floating concert. But as the music continued, the acoustic benefits became clear too: the music on the water delivered a crisp sound, and a gorgeous, slightly ethereal quality as the music drifted away.

After a few songs, O’Kane announced the next act and indicated towards the dark wooded shore, where a single man sat underneath a lone candle. The boats all paddled over as Sam Doores started to play. He held the audience in silence as he performed with an acoustic guitar, the only other sound an occasional paddle in the water or a shout from a passerby watching from the bridge.

“I’ve been on a sailing tour up and down the Hudson with Morgan O’Kane. This is definitely my favorite way I’ve ever toured, after years of vans and gas stations. I don’t know if I ever want to go back.” Doores told the audience. 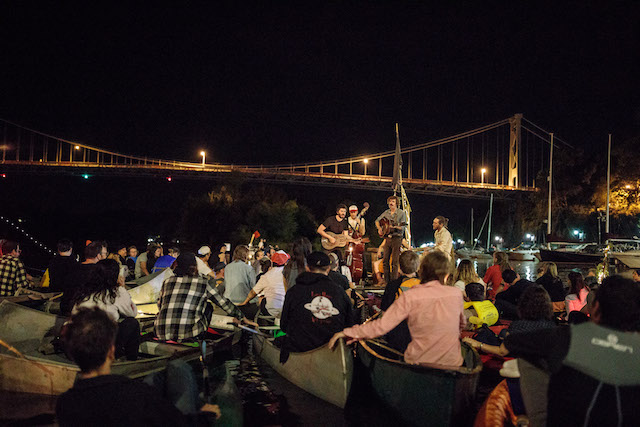 After Doores finished, he joined O’Kane on the main stage as it picked up speed and headed under a bridge. There it drifted in circles and reveled in the echoing acoustics of the music as it bounced between the bridge above and water below. In the distance, lightning could be seen illuminating the sky as a storm passed nearby. A wedding reception materialized on shore, spilling out from a barn-type structure strung with lights. They cheered, and the boat parade cheered them too, as they clustered on shore to watch, their white dress shirts and party dresses just visible in the dark.

The night ended back where it began, with a reception of floating paper lanterns and Doores welcoming people from behind a piano on shore. He closed out his post-concert set with a rousing cover of Jerry Lee Lewis’ “Great Balls of Fire,” complete with setting the top of the piano aflame.