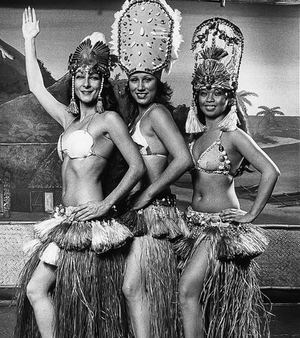 In 1987, the NY Times printed a lexical warning bell, alerting those who cared that as far as the old Times Square was concerned: "Time Is Running Out."

In the article, Kent L. Barwick, president of the Municipal Art Society, says: ''Three or four years ago, if you said anything good about Times Square, people would say: 'You're crazy. It's a hell hole. It's the worst place in New York.' Now, the nature of the debate is, 'What's the best way to save it?' But let me tell you, there's still plenty of disagreement.'' At the time, one remnant of old New York that was still standing was The Hawaii Kai—which you may recognize from Goodfellas:

"Fantasy of the most innocuously exotic variety is the main fare at Hawaii Kai, where a winding staircase takes diners by a gurgling waterfall, through a stalactite-filled grotto, and into thatched-roof dining huts made of bamboo trunks. This is the out-of-towners' Times Square, at Broadway and 50th Street, where it is still possible to order—with a straight face—a Maiden's Downfall, a Head Hunter Zombie, a Tahitian Breeze or The Volcano: ''Served aflame. An eruption of the finest rums fired with sacred nectars. For 2 - $9.50.'"

They also offered a Lounge of Seven Pleasures, with authentic native entertainment, and other "royal pleasures." 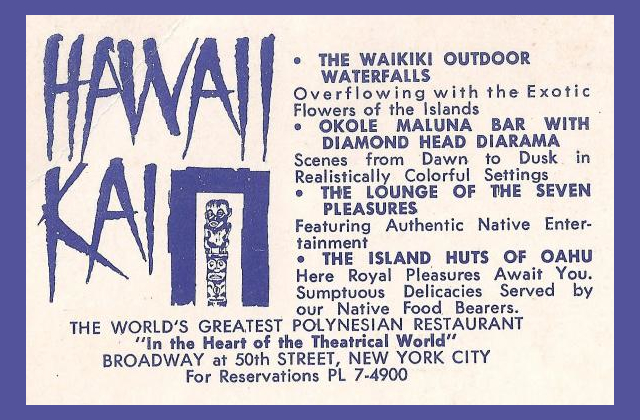 They called themselves The World's Greatest Polynesian Restaurant, and if you stepped inside you'd find "a nonstop luau. Undulating waitresses in sarongs serv[ing] roast pig, poi and other island delicacies in an atmosphere of caged exotic birds, tropical flowers, murals and more. Hula girls instructed diners on the proper techniques of that native dance, and staffers delighted and informed with native songs and island lore. Conga lines formed on the dining-room floor as the music blared and guests sang along." 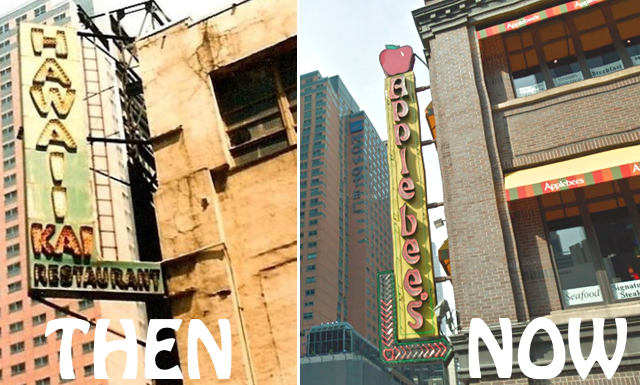 It's an Applebee's now

In the late '80s, rent was going up, and patronage was going down, eventually forcing the joint to close in 1989 after about forty years in business. More recently, Jerry Rio—nostalgist of all things old New York, specifically the Times Square area—revisited the joint. When talking to another former patron, he recall, "for $11.95 you got four exotic hula dances."