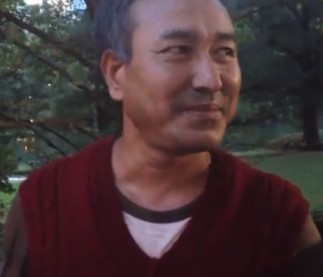 Over the weekend Banksy stealthily set up a stand at Central Park South and East 59th Street, with stacks of original pieces being sold by an older gent who was charged with running the pop-up that day. All but three lucky people passed the pieces by, which were being sold for just $60 a pop (they are actually worth hundreds of thousands each).

Yesterday Lizabeth Zindel tracked down the man who rented Banksy his stand—Thuptin Kunkhen and his friend Tenzin told her Banksy rented Kunkhen's "his table and everything," as well as someone else's, paying a total of $500 ($300 to one, $200 to the other). Since he only sold $420 worth of work, that means Banksy actually lost $80 that day!

When pressed, Tenzin said Banksy "should give him [Kunkhen] one artwork," though seemed happy enough with what he did pay for the stand. The two had never heard of Banksy before—"first time I'm hearing his name, and now I know everyone's asking" about him.

Kunkhen was given a phone number, presumably to reach Banksy's team, but when he's attempted to call it after that day... no one has answered.

And ICYMI, here's how that day played out:

Top video filmed by Lizabeth Zindel (she calls it: "Thuptin Kunkhen Deserves a Banksy"), "a novelist with three books published by Penguin, a native New Yorker, and huge Banksy fan who is haunted by 'What if' after being out of town the one weekend he set up shop in Central Park."

#banksy
#central park
#Thuptin Kunkhen
Do you know the scoop? Comment below or Send us a Tip