Video: Meet The Beloved Family Who've Been Selling Christmas Trees In The West Village Since 1988

The life of a Christmas tree vendor can be stressful—for one month of the year, they're on the concrete seven days a week for exhausting 14 hour days, hustling to make deliveries, dealing with potentially rude customers, watching out for rats and other creatures. But there are some unexpected upsides too: "I've been seduced once or twice on my deliveries," said Billy Romp. "I'm 66-years-old, and it doesn't happen that often. I'm a rough-looking country man who probably hasn't had a shower in days. But, it has happened—not this year, not last year, but in the past it has happened. I'm too embarrassed to talk about that stuff!"

Since 1988, Billy Romp and his family have been making an annual pilgrimage to the corner of Jane Street and 8th Avenue in the West Village to set up their "Romp Family Christmas Trees" stand. They have become arguably the most beloved tree vendors in Manhattan, which is not something that Romp takes lightly: "It's strange to me that people are so interested and so hospitable to such a humble guy," he told Gothamist. "Some of our very wealthiest customers will sit me down on their couch when I make deliveries and insist that I have an eggnog and tell them about my life in the country. I feel like a delivery man one minute, and the next minute I feel like a guest in their home. It's really a good feeling."

Because the Christmas tree business is dominated by volunteer groups like the Fire Department and the Boy Scouts out in the country, the Romps discovered that big cities like New York are the one place you can actually make a business out of it. Not that there was any big secret as to why they ended up settling in the West Village: "I got to choose this location," Romp said. "We didn't know much about it back in 1988. We chose this location because it looked nice. I developed it. I contacted the people in the garden here, the Jane Street Community Garden."

The first year they set up shop, they sold about 190 trees; 31 years later, they are cracking over 1,500 trees sold a year (they can only keep about 300 on the sidewalk at a time, so they have to replenish several times over the month). It used to be that Saturdays and Sundays were their biggest days of the week, but things have become more spread out throughout the weekdays now: "We have a lot of theories, but we can't figure it out. It's a funny thing. Of course, the neighborhood has changed with gentrification, there's more wealth in the neighborhood than there used to be. That might have something to do with it."

But as Romp tells it, the business is really all about who you know—or more specifically, who you befriend. "When we came here, we didn't know anything about New York," Romp said. "We thought, 'Oh, it's dangerous. We've got watch ourselves all the time.' I found the opposite to be true. It's like a real village here."

"My best friends in my life, my closest associates, live in this neighborhood," he continued. "I go skiing with them in the winter. They come to visit me. I come down here and visit them in the off-season. I go to their children's weddings. I really am a lucky guy to live in Vermont and identify as a West Villager—I can't say resident, but I'm a West Village citizen, a citizen of this village. I know so many people here by first name, their dogs, their kids, I've seen them grow up. That's the positive, that's something you can't buy. I wouldn't trade it for anything."

"Even if I only see them maybe three times a year, I have really good, close connections. I'm the luckiest guy in the world in that way, man. There's nobody I know of [who] has a closer relationship with more people than I do. I'm just so lucky."

His care for longtime customers is part of every aspect of the business, even when it comes to pickiness: "My joke is, 'I'll open as many trees as many years as they've been customers.' If they've been a 20-year customer, I'll open 20 trees." (Having said that, he advises people that you should probably not ask to open more than five or six max.)

It seems idyllic, but he swears it's true: people are fastidious about making sure their dogs don't pee on the trees, even the rats seem to stay away nowadays. And although the Romps pay someone to stay with the trees overnight, they haven't had any problem with theft in recent years.

"Late '80s/early '90s, when my parents first started, it was a different neighborhood and people would try to steal the trees," said Romp's son Henry, who has literally been part of the family business since he was an infant. "I don't think there's been an actual serious attempt in quite some time. When SantaCon happens, you have drunk Santas walking by trying to pick up one of the little ones. But we keep all the little ones up front where we've got a clear easy view of it. And the trees at the end of the rack are 12 foot trees and weigh a couple hundred pounds. If anyone tries to pick one up, you can see the top of the tree moving from way over there." 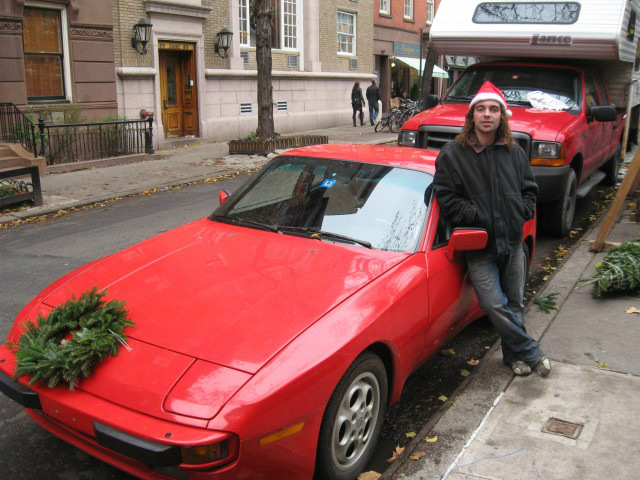 Henry Romp with his beloved Porsche, back in 2010 (John Kuhner/Gothamist)

Those long-developed relationships around the neighborhood are why they've been able to continue doing this for so many years. When they need to brush their teeth or go to the bathroom, they can pop into one of the local businesses, such as Tavern on Jane, Bonsignour, or La Bonbonniere. "They know we're out here stuck," Romp said with a laugh. "They're concerned for us too. That's what everybody asks us about, where we pee. Just like an astronaut, you always ask astronauts how they pee."

While Romp's daughter Ellie and her four kids have branched out over the last couple years with their own tree vending spot in Brooklyn Heights, Billy and Henry have remained loyal to their corner (Romp's grandkids sometimes come over to help them out). The two Romp men sleep in their camper, which is parked on the corner of Jane for the entire month, despite the fact that there are alternate side parking rules for that block.

"Twice a week, we're supposed to move for two hours for the street sweepers," Romp said. "We've never moved once in the 31 years we've been here. The street sweepers themselves, and the sanitation cops who come around to give tickets, they're our friends, they love us. When we started we had little babies and little kids, so that was easy to charm people. But the charm has continued. In exchange, we sweep heavily and make sure it's very clean underneath our vehicle so that we don't leave a mess for 'em."

As we talked more about this, Romp brought up a surprising anecdote about the mafia and his relationship with police, which gives you a vivid impression of how this business works:

Before Giuliani, I could give any cop a wreath or a tree or anything and he'd be happy to accept it. During Giuliani's years, they wouldn't accept it. Now, they get a tree for their precinct house from us. They have a party every year for kids, we provide the tree. I persuaded a few of the officers to let me provide them a tree for their home. They feel generous towards us, they always bring us stuff. The cops bring me cookies, if you can believe that. They give my kids rides in a squad car around the block, I don't know if that's legal—I hope I'm not getting anybody in trouble. But we got really good relations with all those guys, and I give them as much as I can.

I give the sanitation guys and the fire department big trees for their offices. Sanitation helps us with our trash issues sometimes. I don't know if I'm giving out any secrets but yeah, it's a good and nice relationship. A very cynical view might call it "graft," but it's a few trees for me and it's no big deal for them to throw a few bags in the back of their truck.

So even today, the cops never fail to slow down when they go by and say, "Everything alright, Billy? You okay here?" I give them a wave. They never fail to check on us like that. 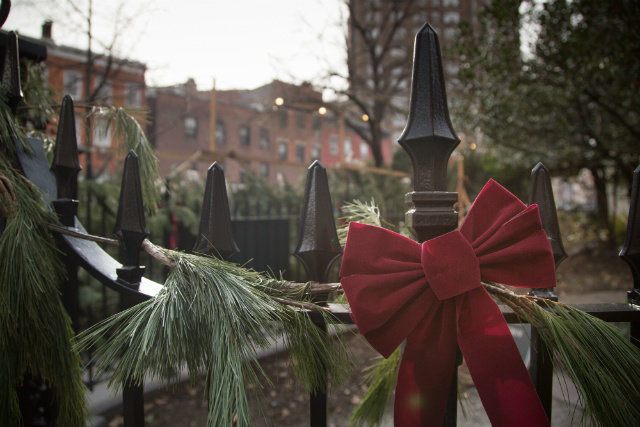 The Romps stay at Jane Street right until midnight on Christmas Eve, at which point they hustle to make sure they're home in Vermont for Christmas morning. I was surprised to hear that people are still in the market for trees as late as Christmas Eve, but Billy noted that while some are procrastinators, for others, the last-minute tree is part of their tradition.

"There's a family, they're Scandinavian or Swedish, who live on Perry Street, and it's their tradition to not have any decorations in the home during the season," Romp explained. "They put the kids to bed at whatever time on Christmas Eve, and then they come out and buy a tree, and they decorate it and put the stockings up and do everything, so when the kids wake up on Christmas morning, it's transformed."

"That's their tradition from the old country. And since 1988, we've seen this same family, and there's three generations of them now. Once we see them, we know we can pack up and start the engine."