Video: Meet "Notorious PhD", The Professor Who Raps About Gentrification

We already know that the onslaught of gentrification has swept through Manhattan and pillaged Brooklyn of its soul, from Bed-Stuy to ProCro. But one "funky fresh" rapping Professor is warning that the Bronx may be next. "The Bronx is the last refuge for working-class, immigrant New York. I don't want to walk through the Bronx and see Park Slope," said Professor Mark Naison, who has lived in Park Slope since 1976.

Professor Naison, who teaches at Fordham University, has taken to rapping under the moniker "Notorious PhD." He found that if he did a little rapping, students were more receptive to what he had to say about rent prices and Bronx history. He believes the signs of gentrification are already apparent around Yankee Stadium, and points to a housing complex with hundreds of market-rate rental units planned for West Farms Road along the Sheridan Expressway. In "Not in the Bronx," he raps: "Without immigrants and workers / It's a rich man's town / The Bronx is our home / Let's keep the rents down." Hmm...who does THAT sound like?

Naison will perform "Not in the Bronx" Thursday at the Urban Plunge, an annual community service event just for Fordham freshmen. Below, check out "Not in the Bronx," as well as a rap about trickle-down economics. And while you watch, you can consider whether we are currently in a golden age of rapping old white guys.

Update: As commenter Sarah pointed out, Naison was once featured on Chapelle's Show for the skit/game show, "I Know Black People." Check out a clip, as well as a screenshot, of him below: 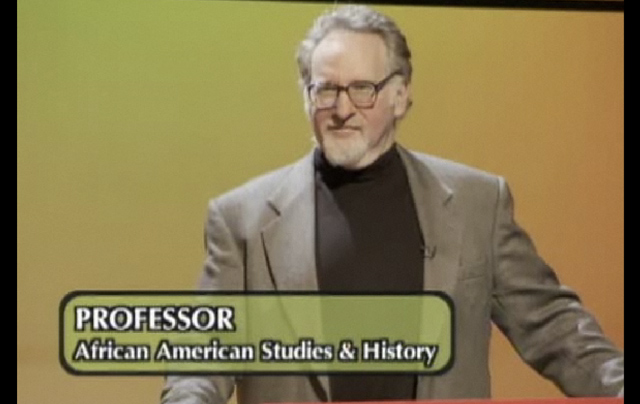 #bronx
#fordham
#gentrification
#notorious phd
#park slope
#rap
Do you know the scoop? Comment below or Send us a Tip