An adventurous cat who climbed seven stories up a tree and couldn't (or wouldn't?) come down was rescued in dramatic fashion in the Bronx on Tuesday.

Locals say good feline Samaritan Pedro Rosario, who started New Beginnings Animal Rescue, made his way high up the tree after other city agencies declined to help. NBAR volunteer Roxanne Delgado tells us, "Residents including the cat owner called NYPD, FDNY, and 311 for days to no avail. Yesterday the ESU arrived and assessed the situation. They stated cat was on top of the tree which was about 7 stories high. They left after stating the top branches were too thin and they wouldn't risk their safety for a cat. Pedro... arrived immediately afterwards with just a ladder and climbed up to top of tree and rescued cat."

This video shows the cat falling to the safety of a blanket!

The cat, named Missy, wandered onto the tree after climbing onto the scaffolding (Missy usually goes in and out of her second-flood apartment). Originally Missy was about half way up the tree, but the night before the rescue, some people were throwing some pebbles at her, in hopes she's come down. Instead, Missy climbed higher. 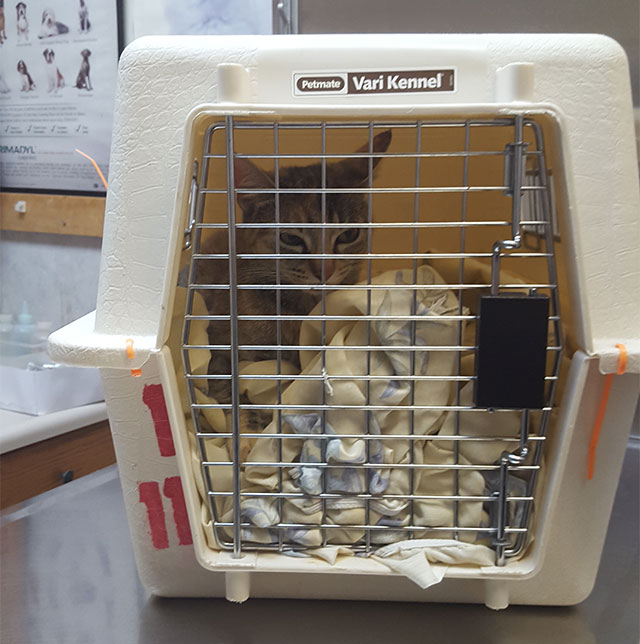 Rosario took Missy to a veterinarian for a checkup. She received fluids and is back at home with some antibiotics. Owner Rosie Ortiz said her windows are definitely not going to be opened wide anymore.

New Beginnings Animal Rescue is holding a fundraiser on June 4, with 100% of proceeds going to the no-kill shelter. (It's actually the only no-killer shelter in the Bronx.) Rosario used his 401K money to start and keep the shelter going.