In 2009, members of the Duke Ellington Orchestra convened to play the song for "Duke Ellington Day" in April. (Photo by Daniella Zalcman) 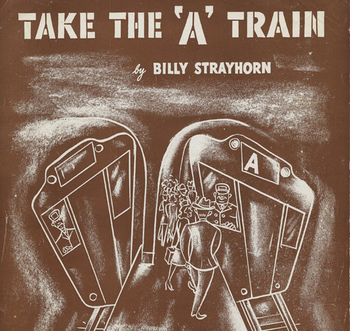 Could you imagine composing a beautiful tune in tribute to the A/C/E line today?

The opening notes of "Take the A Train" are some of the most familiar in our musical landscape, even if they're from an era long gone by. It was the signature tune of the Duke Ellington Orchestra, and yesterday it was celebrated by the MTA in honor of what would have been composer (and writer of the song) Billy Strayhorn's 100th birthday. Strayhorn composed the song in 1939, when the A Line was just 7 years old.

[Strayhorn] said that the music and lyrics for "Take the A Train," originally recorded on February 15, 1941 by Ellington for Victor Records, came more quickly than the subject of the song itself—the New York subway line to the Sugar Hill District of Harlem. It was so easy for him, he said it was "like writing a letter to a friend."

When Ellington invited Strayhorn to NYC, he wrote directions for him to get to his house by subway, and they started out: "take the A train." The lyrics you know, however, were actually written by Joya Sherrill in the early 1940s—she was 20 years old and "made up the words at her home in Detroit, while the song played on the radio" as an instrumental. Thanks to a connection her father had, Ellington heard her lyrics, adopted them, and hired her as a vocalist.

Strayhorn's song has been performed by many, perhaps most famously by Ella Fitzgerald. And here it is in the film Reveille with Beverly:

Yesterday the MTA Music Under NY program paired up with the Transit Museum and Jazz at Lincoln Center to bring the song to the subway platforms, and Gale Brewer issued a proclamation declaring November 29 as “Billy Strayhorn Day” in honor of his work. Here's one vintage subway train car being filled with the song:

And for those keeping track, Phish hasn't covered the song live since their Beacon Theatre show on April 13th, 1994, which isn't on YouTube, so...