Earlier this week, Seinfeld fans were a little verklempt after Jerry Seinfeld, Jason Alexander and Larry David were all spotted loitering around Monk's Tom's Restaurant on the Upper West Side. We were told by separate people at the restaurant that they were filming an episode of Comedians In Cars Getting Coffee and/or a Super Bowl commercial. Well, according to Gian Franco Morini, who is directing a documentary about Tom's, it was a Super Bowl ad. And you can see more footage of the three comedians at Tom's below.

Among other things: someone asks Larry David about the "mysterious project" Seinfeld alluded to in his Reddit AMA last week—that project, it turns out, is likely a Broadway or off-Broadway play which David has written and Seinfeld may star in. Either way, David said this had nothing to do with that.

You can also see the crew using a snow machine in front of Tom's. The gear they were using to film it was marked "Comedian's," but the use of the snow machine does signal that this is not for Seinfeld's unadorned web show. 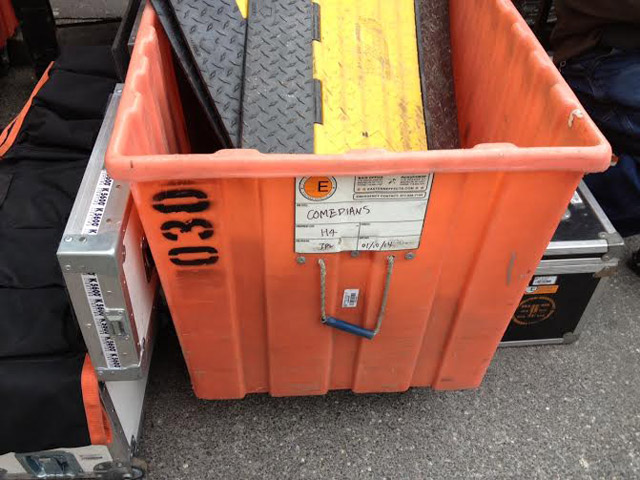 Could this be for Comedians in Cars Getting Coffee? (Ben Yakas/Gothamist)

Regardless of what Jery and Garge were up to that day, we know one thing for certain: Larry David definitely does not want to buy a chocolate bar from the Inside Edition camera man.