The ball drop may be the first thing that comes to mind when you think of New Year's Eve in Times Square (unless your first thought is "WHY?"), but the long, tubular balloons distributed to revelers as the clock nears midnight are also a crucial part of the crazy scene. We went backstage yesterday with Balloon AffAIRs, a Syracuse-based company run by Danny Magowan that has been hard at work the past few days inflating and storing thousands upon thousands of purple balloons.

Magowan's company has been providing the balloons for Times Square on New Year's Eve since 1995. In total, he told us, it takes his 27 workers about 14 hours to blow up the 25,000 balloons and tie them with 12.5 miles of mylar ribbon. The balloons' sponsor varies from year to year — this year, it's Planet Fitness, hence the bright purple balloons emblazoned with a gold logo.

Inflating all those balloons is no walk in the park, and a tough job for anyone the least bit jumpy: every few minutes, a loud POP shocks the balloon-filled room on the fifth floor of One Times Square. Magowan said a balloon bursts once every fifty or so, and he always buys extra for just that reason. Most of the people inflating balloons wear earplugs or noise-canceling headphones for just that reason. They also wrap their fingers to keep them from getting blistered or turning purple from the balloon dye. Like we said in the headline, INTENSE. 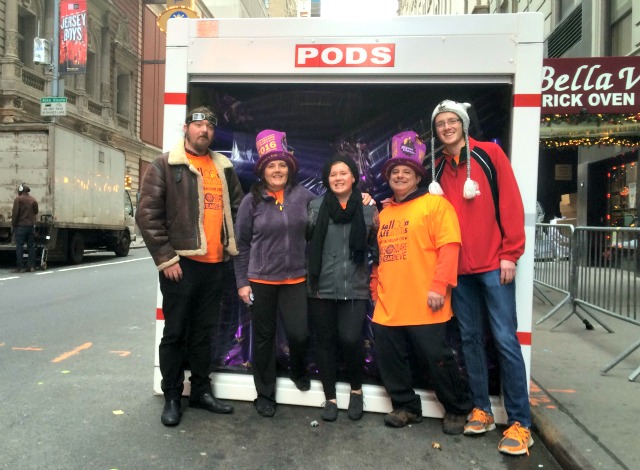 The balloon crew then fights its way through a crowded Times Square to store the inflated balloons in pods on 43rd, 45th, and 47th streets. In the two-block walk, they're approached by numerous passersby asking for a balloon (Magowan says they once had a whole bag of 20 balloons stolen right out of their hands). The balloons that make it to the pods stay there until about 10 p.m. on New Year's Eve, when they're distributed to the crowds—their reward for braving hours in the cold(ish) human zoo that is Times Square on New Year's Eve. WORTH IT. Happy 2016!

#balloons
#gothamist films
#nye 2016
#Times Square
Do you know the scoop? Comment below or Send us a Tip