Video: Inside The NYPL's New Stacks, 27 Feet Below Bryant Park

Have you ever wondered what's underneath Bryant Park? In short, a treasure trove of historical items—maps, manuscripts, rare books, and more periodicals than you ever knew existed. Also: George Washington's recipe for beer.

About 17-feet below the lawn you'll find the New York Public Library's Milstein Research Stacks, and now underneath that, 27-feet below Bryant Park, a new space is being built out for the library's growing collections. This will also become a home to the books being relocated from the 105-year-old central stacks—an above-ground space that whose future will be determined later, we were told. 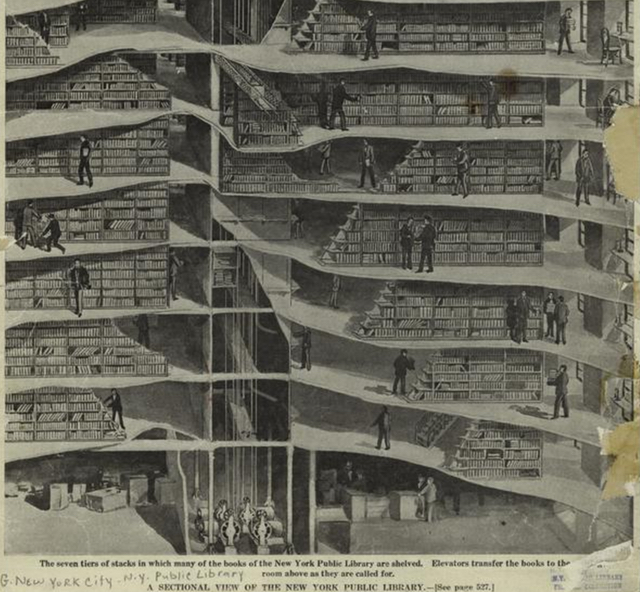 Old stacks at the NYPL. (Courtesy of the NYPL)

This week we visited both levels of the Milstein Stacks (I and II), and for now we'll focus on the new space (II), which is still being constructed. That space was originally carved out around the same time the Milstein I stacks (which opened in 1991) were built. Library leaders knew that as time went on, the collections and materials would grow, and they didn't want to outgrow their space (and, say, have to controversially relocate items to New Jersey). At the time there was no funding to complete both spaces, so the lower level remained gutted for decades. 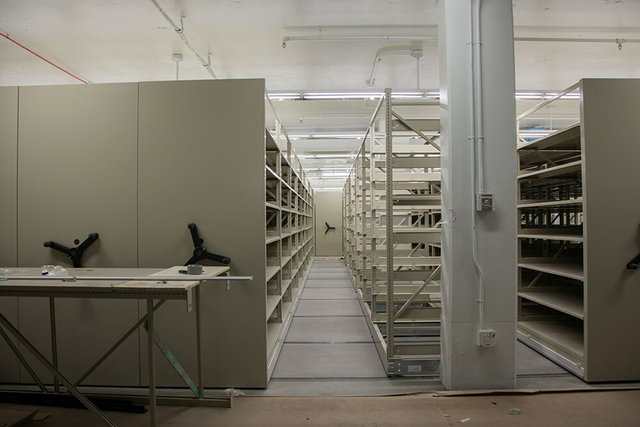 Thanks to a generous gift from Abby and Howard Milstein, construction on the new space began earlier this year and is still moving along. This is one of the most sophisticated book storage systems in the world, and contains 29,021 shelves. There has never been a Dewey Decimal System for their research collections, so everything is organized by size, not subject. The NYPL's Denise Hibay told us "that’s the approach that New York Public Library has taken since its very inception, more than 100 years ago." They can do this since they operate as a closed-stack library, meaning that only the staff can retrieve the books. 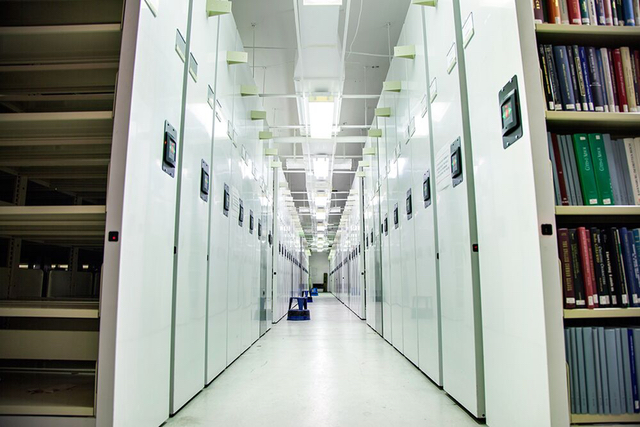 Milstein I, the stacks 17-feet under Bryant Park, built in 1991. (Amy Finkel/Gothamist)

So, if a researcher needs something (a copy of last month's Check the Oil! magazine, the aforementioned recipe for beer, or an out-of-print book), a page will locate it in the stacks via GPS-type coordinate. Once retrieved, it will be delivered through a mechanized system. This takes around 40 minutes.

Here is Gerry Oliva, Director of Facilities Operations for the NYPL, in Milstein II, which is about 56,000 square feet in size. The big difference between I and II, which he'll explain in this video, is that a manual crank will be used over the mechanically driven units (which technically could malfunction and trap a person between shelves, though that has never happened).

Oliva also explained that there a watertight envelope was created to protect the space—"to do that we installed waterproofing on the floor. We actually drilled through the foundation and injected a waterproof curtain behind the exterior walls. We’ve created an angular space around the entire perimeter with a trough that will collect any water that should get by any of the waterproofing and divert it to drains. We’ve installed a water center so that if there is any moisture detected, alarms will go off and notify our staff if it becomes a problem. And this was all done with the purpose of ensuring that moisture and water does not get towards any of our collections."

They hope to have all the shelving units installed by March of 2016. After that, they'll be bringing back books and items from a temporary storage unit and start placing them in their new watertight, temperature-controlled home.

#gothamist films
#milstein stacks
#new york public library
#nypl
#stacks
#original
Do you know the scoop? Comment below or Send us a Tip