The sub-basement of Grand Central Terminal is New York City's deepest basement, at least that's what they'll tell you. It's also likely the safest and one of the most secure places in all of the 5 boroughs. It was never included on blueprints for the building, and its exact location remains confidential to this day. To make it all the more mysterious, the room is called M-42, which sounds like something straight out of The X-Files.

While M-42's location and access points are still a secret, we were recently invited down there by the heart & soul of the MTA, docent-in-chief Dan Brucker. We took the stairs. 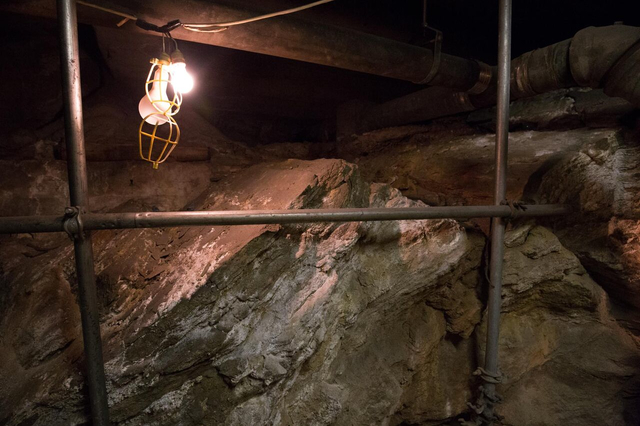 The old schist and bedrock in the sub-basement. (Photo by Sai Mokhtari/Gothamist)

On the last flight down, you realize just how far below street level you are when you see 600 million year old New York schist and bedrock surrounding you. Brucker told us, "You will see lines drilled through that rock where they put tubes of dynamite to blow the rock apart [during construction in the early 1900s], and to bring all that rock up [they used] horses and carts." He tells us that this stone was later placed along the banks of the Hudson—"Our Hudson Line used to be called the Water Level Route. It ran along the Hudson River up to Albany. All the rip-rap stone along the banks of the Hudson River—right up to Albany—is the basement of Grand Central Terminal."

There's history hiding all over Grand Central Terminal, but the sub-basement is undoubtedly the home of its most intriguing stories. It was only ever acknowledged by officials in the 1980s, but four decades before, during WWII, Hitler caught wind of it and sent a small group of Nazi saboteurs to infiltrate. This is the story of how he failed.

During WWII, armed troops were often stationed down in M-42, and the area was always protected by armed guards (to this day it is well-guarded). Once we reached the steamy subterranean space, Brucker explained: "If you came through that door and you were carrying sand, you were to be shot on sight."

In order to slow America’s entry into the war, Adolf Hitler came up with this plan. He sent 2 submarines from Germany to the East Coast of America with a surface on the banks of Amagansett on Long Island. Four Nazi saboteurs came out. They were seen in the middle of the night by a coast guardsman, but they disappeared into the black. The coast guardsmen let the FBI know there were 4 Nazi espionage agents. Where were they?

They made a beeline into Grand Central Terminal, because their mission was to get down [to the sub-basement] and to destroy the rotary converters. And they almost did. But they made one fatal mistake. They checked their luggage into our luggage check. Little did they know, because we were forewarned there were enemy espionage agents around, we were checking everybody’s luggage who checked their luggage into our luggage check.

So we knew that this luggage had to belong to the spies. We had their luggage. Where the hell were the spies? The FBI sat on that luggage, day in and day out, until they finally came back to get it to make their way down here. All of them were arrested; two of them were executed. The other two had their executions commuted by FDR because they spilled the beans on the whole operation. They were imprisoned; they were released in 1956... both of them are still alive and living in the U.S., collecting Medicare.

That last bit is no longer true—the saboteurs were George John Dasch, Ernest Peter Burger, Richard Quirin, and Heinrich Harm Heinck. Dasch and Burger, who weren't executed, died in 1975 and 1992, respectively. They certainly weren't the only Nazi saboteurs to infiltrate America at the time—the NY Times printed a huge cover story in 1942 after they, along with others, were arrested. You can read that here.

Stay tuned for more secrets from the sub-basement, coming up tomorrow.

Update: Here's the story of the 102-year-old electronic computer preserved inside of the sub-basement. We've been told that Apple execs have visited to pay homage.