We were recently granted access to areas of Grand Central Terminal that are typically closed to the public—from nooks near the ceiling, to a hidden sub-basement that Hitler once tried to infiltrate—where you will still find a 102-year-old old computer preserved intact. But embedded in plain sight in the front of the building is one of Grand Central's most beautiful show-stoppers: that enormous glass Tiffany clock, which we got to inspect from the inside looking out. Here's the MTA's Dan Brucker telling us a little bit about how the clock came to be:

Brucker says the piece, which could have cost them hundreds of thousands of dollars, didn't cost a dime—"Tiffany’s said we’ll pay for it, and we’ll say Grand Central’s on 'Tiffany time.' All they wanted was one half of that [Vanderbilt Hall] room for an exhibit."

The clock is not easy to get to—even the access point is in an off limits area, and once you get through that door, you'll need to climb up a series of old, thin, metal ladders. These lead to a wooden room that most closely resembles an attic. It almost seems as though it's gone untouched since the clock was installed in 1914, with gears, layers of dust and old oil cans the only other presence. 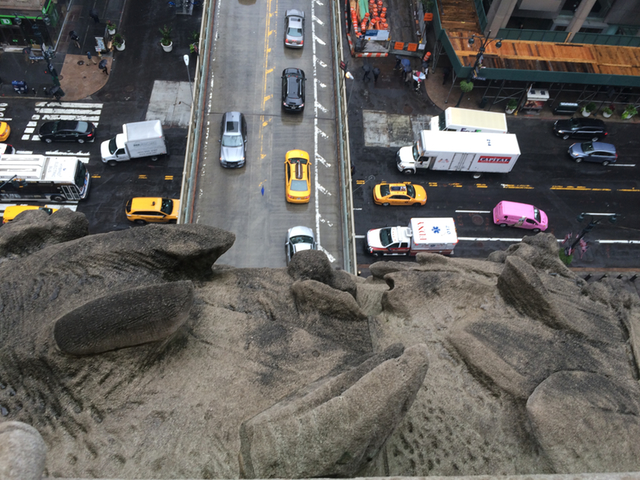 In 1992, the clock was restored by Rohlf’s Studio—a painstakingly slow process that included removing the glass piece by piece. This ended up taking 12 years to complete:

Accessible only by a narrow staircase leading to a small ‘clock room,’ each piece was removed from the inside. The glass was brought to Rohlf’s Studio in Mt. Vernon where the process of restoring and replicating the priceless clock took place. Since the pieces had suffered heavy damage since their installation in 1914, Rohlf Studio repaired damaged pieces and replicated missing pieces as part of a complete restoration. After completion, each piece of the largest stained glass design ever created by Tiffany Studios was carefully reinstalled where it continues to overlook 42nd Street to this day. 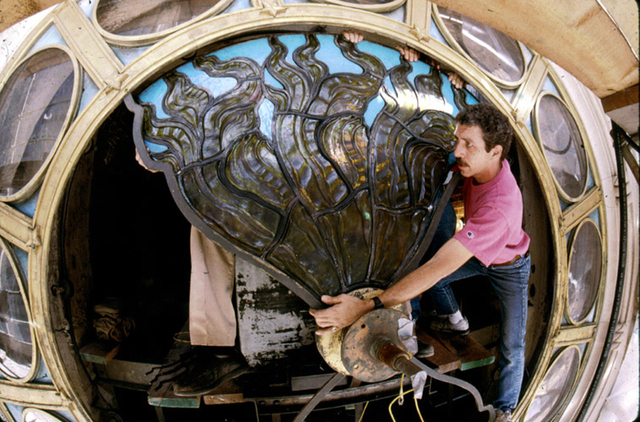 This clock, along with every clock in Grand Central, is set every second by the atomic clock in the Naval Observatory in Bethesda, Maryland, so it's about as accurate a time as you'll get... and it's all guarded by Mercury, Hercules, and Minerva. These sculpted gods are said to represent the railroad via their godly claims to speed, strength and intellect. The Transportation sculpture, as it's called, was created by French sculptor Jules-Felix Coutan, and measures about 48-feet high. Here's a shot of them from the outside circa 1917: 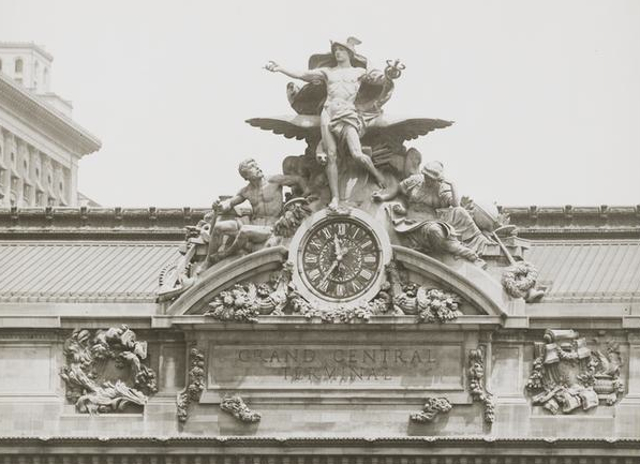 #behind-the-scenes
#gothamist films
#gothamist grand central tour
#grand central
#tiffany clock
#original
Do you know the scoop? Comment below or Send us a Tip
A new Gothamist is coming! We’ve moved comments over to our beta site. Click here to join the conversation and get a preview of our new website.