The death of a mascot is never pretty. Who can bear to look as a fun-loving character that once came to life on the field is destroyed in the spinning metal wheels of an industrial shredder? That is how the old Yankees mascot Dandy left this world, and he was almost never heard from again. While no one is really to blame, there's certainly blood fur on the hands of Lou Pinella, the San Diego Chicken, and George Steinbrenner.

Sometime around the early 1980s, the Yankees had introduced Dandy, their first and last mascot. This fuzzy, pinstriped guy has a short, hazy history, as he was never fully embraced by the franchise. Dandy was "a failure," according to the NY Times, but we would argue that he just wasn't given enough of a chance to succeed.

There is very little information out there about Dandy, so we visited with his creators Bonnie Erickson and Wayde Harrison at their New York City home recently, which doubles as their workshop and studio. Erickson has created some of the most beloved Muppets—including Miss Piggy, Statler & Waldorf, Rowlf— and along with Harrison is responsible for a few MLB mascots, most famously the Phillie Phanatic, but most intriguingly this Dandy character. Their home is a colorful tribute to their life's work, and when we arrived the Phanatic was being freshened up for the start of baseball season. There were few traces of Dandy left, however, tucked away in filing cabinets but not totally forgotten. 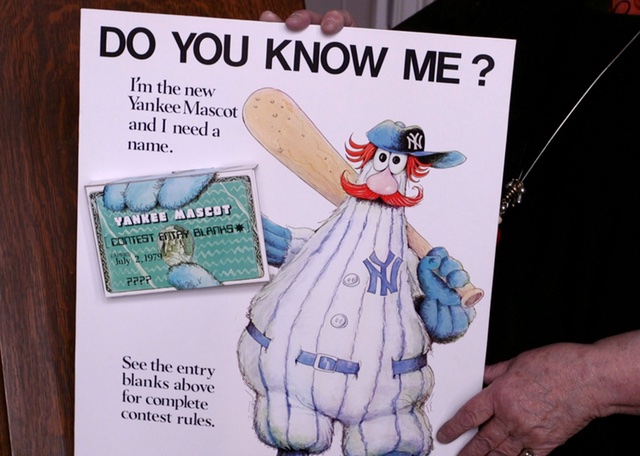 An AMEX campaign to name the mascot. (Courtesy of Harrison/Erickson)

While it may not seem like it now, Dandy happened because the Yankees wanted him to happen—"I loved the idea of doing a mascot for New York City," Erickson told me, "I mean, I just thought that was... apart from doing something for Brooklyn, I would say doing something for New York City in general would be the greatest thing I could do. So, we were very excited to get an inquiry from the Yankees."

Dandy wasn't based on anyone in particular, though some rumors have stuck around that he was inspired by celebrated Yankees catcher Thurman Munson. "My first idea was to do an old fashioned Yankee player," Erickson explains, "I did a lot of research on the uniforms and we wanted to think of this as a sort of dyed-in-the-wool Yankee.... people did say that Thurman Munson was the inspiration, but I wasn’t even really that aware that it looked so much like him. And it really... in retrospect, it did."

This early sketch of Dandy (below) actually has a nod to another famous Yankee, Babe Ruth. In the caption, he's referred to not as Dandy, but as Babe Brute—"the best looking starter with the most amazing mustache the Yankees will ever see." And he even boasts that not-quite-athletic form of an old ball player. 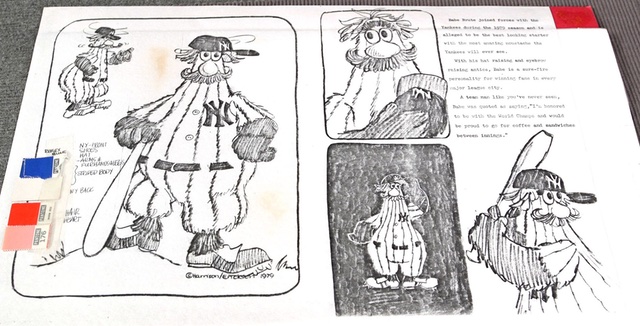 An early sketch. (Courtesy of Harrison/Erickson)

To bring Dandy from paper to the ballpark, Erickson had to meet with The Boss. "One on the first sketches that I did for Dandy was the one that I showed to George Steinbrenner and his group, with the colors and the idea for it," Erickson told me. "When it came to the blue, I wanted to make it a lighter blue because I didn’t want it to read as black, and I told George that and he was very upset. We had a little bit of an argument about that. When I came out of the meeting, the people who had been in there with us said, 'How do you dare say that to George?' He was somebody to be feared and I didn’t realize that. So that’s probably just as well."

Erickson won, and Dandy's coloring was a little lighter than Yankees Blue, but Steinbrenner, who by the 1990s claimed to have no recollection of Dandy at all, had other issues with the mascot.

In the beginning, Steinbrenner "was very much on board with everything," but then there was that incident between Lou Pinella, the Yankee outfielder, and the San Diego Chicken, which annoyed him so much that he threw his glove at it. Pinella later said, "If people want to pay to see a chicken, they should dress up the ballplayers in chicken suits." This incident occurred right around the time Dandy was going to debut, and Steinbrenner declared that mascots didn’t belong on the field. "So that really cut back where he was allowed to perform," Erickson told me. Dandy was basically banished to the nosebleeds, and many didn't even know the team had a mascot. 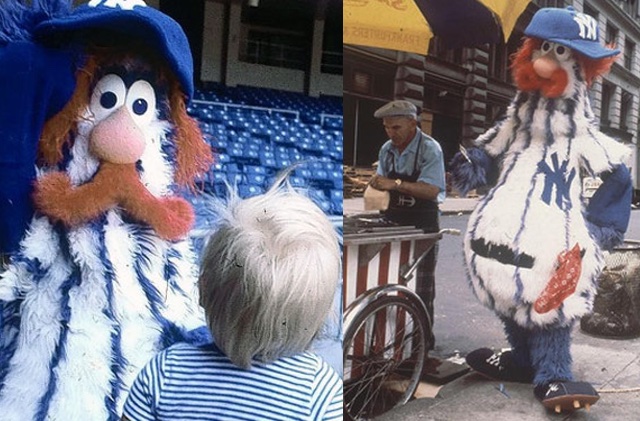 "He still went on for a three-year run," Erickson said, roaming the upper decks of Yankee Stadium from mid season 1982 through 1985. "But at the end of that, we decided, as did the Yankees, that we were just not going to do it any longer. The Yankees were really not giving it the support that other teams did and the things that made a mascot really successful for a team." And so Dandy's life came to and end, and since there were copyrights involved, his end meant the shredder.

"Where is Dandy now?" I asked Erickson. "Dandy’s gone. Dandy’s in our heads and in our slides, and that’s about it. Anybody who has characters that are copyrighted or that are licensed wants to make sure that they don’t just get out in the public. So [he was] disposed of... cut up and destroyed... shredded. It was a terrible thing to have to do."

Learn more about Dandy in the above video—and here's our second segment focusing on Erickson's work with Muppets.

#mascots
#dandy
#wayde harrison
#bonnie erickson
#gothamist films
#Yankees
#original
Do you know the scoop? Comment below or Send us a Tip