Video: Here's What NYC Looked Like During The Historic Snowstorm Of 1947

One of the biggest snowstorms to hit the city was on December 26th and 27th of 1947. By the end of those two days, Central Park was blanketed in a whopping 26.4 inches of snow. According to NYC.gov, the blizzard held rank as the biggest snowstorm in our history—"as moisture in the Gulf Stream fed the storm's energy, the City was paralyzed when the blizzard barreled its way through, stranding cars and buses in the streets, halting subway service, and claiming 77 lives." At the time, an estimated 30,000 vehicles were abandoned on highways and streets. 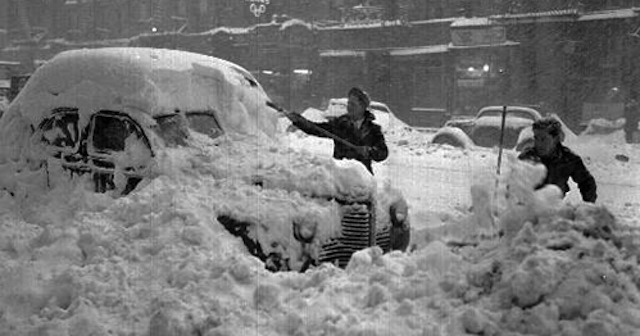 The storm hit NYC directly, with little snowfall outside of the five boroughs—Manhattan received 26.1-inches; both the Bronx and Staten Island got 25-inches; 27.2-inches in Brooklyn; 24.6-inches in Queens.

Below, see footage of the city during the storm—as the newscaster notes, "99 million tons of snow falls on New York, in the greatest storm of its recorded history. The 15-hour precipitation puts the big town in a deep freeze. As the snow descends at a rate of 2-inches per hour, car travel becomes hazardous, and pedestrians scurry for shelter. Most activity ceases, and then the metropolis becomes a silent city under a ghostly mantle."