In 1913, what some consider to be the first electric computer, built by Westinghouse, was installed in the sub-basement of Grand Central Terminal. You know, the one Hitler tried to infiltrate? Today, over 100 years later, the computer and its various components are still preserved down there.

Walking around in the still functioning sub-basement (which is referred to as M-42, and is not open to the public) you wouldn't even notice a computer, since it does not resemble today's machines. The section it's still housed in, however, looks more like a museum exhibit than a control room today.

We recently got a behind-the-scenes look at Grand Central, and the MTA's Dan Brucker took us down to the sub-basement and showed us the computer. He told us that, "Every year, Apple computer chieftains, ultra super chieftain hoo-has, come down here... they go behind that board, and they literally quietly pay homage to what’s behind there. Pay homage to what? The first ever, ever, ever electronic computers."

We cannot confirm that this is indeed the "first ever, ever, ever" electronic computer. For one, this sub-basement and everything in it was a secret, and its existence was denied all the way into the 1980s. It wasn't on blueprints for Grand Central, and its exact location and access points remain classified today. But it's still a very, very, very old computer... and in the below video, Brucker explains how it worked.

Brucker explained that there were so many miles of track, that "if a train stalled somewhere in these vast tunnels, how were we to know where it was, not to smash into it, to rescue it, to get it out of the way? A mystery." From the video above, here is how Brucker explains the computer and how it functioned:

Westinghouse, in 1913, came up with this idea: they strung cord along the tunnel walls. If the train stalled, a crew member would reach out and pull on that cord. On the other side of this are four huge brass bells. Under each one it says, “Tunnel alarm” and “track number.” It would ring one of those bells ultra loud to tell us that there was a train out there stalled. Well, that’s great, but how were we to know where in the 33 miles of track it’s stalled?

Westinghouse in 1913, before the first World War, built the first ever, ever, ever electronic computers that could actually compute that train’s exact location. They were so proud of it... but now they had an even bigger problem: if the computer knows where it is, how the hell are we supposed to find out? On the bottom, below all those glass encased computers, are ticker tape machines that would print out that train’s location. 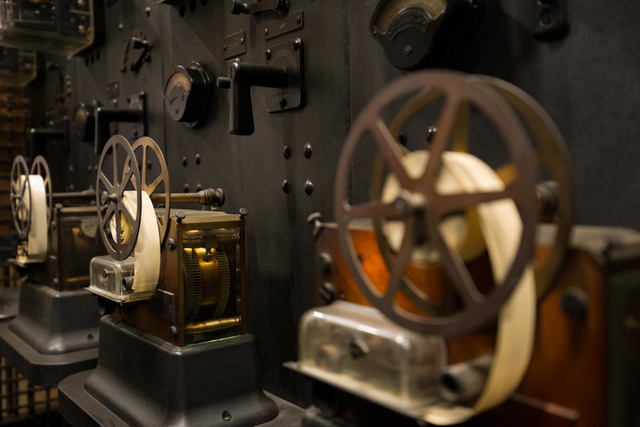 That entire system was obsolete by 1922, because we had voice radio communication. The people who worked down here then kept it exactly the way it was on the day it was decommissioned, even with the paper and the ticker tape machines, thinking, maybe somebody in the 21st century would like to see it. Isn’t that amazing?"

Westinghouse was around for a little under thirty years at this point (it was founded in 1886) and was part of a group of innovators racing to electrify the world. You can watch a full documentary on the company, and George Westinghouse, right here.

More on the secrets of Grand Central coming up next week...