Photo on right via Mister Afternoon 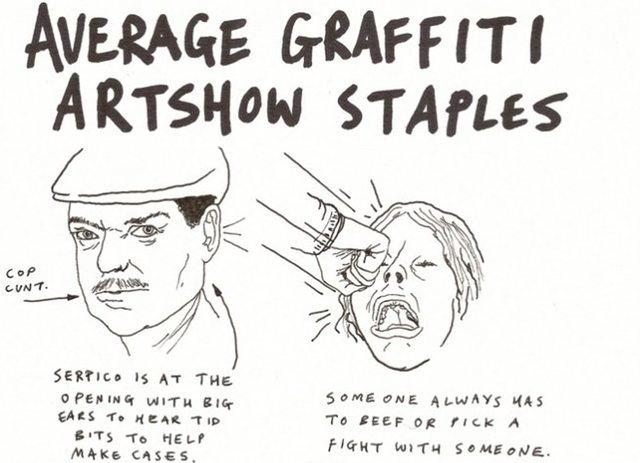 At a previous group show at the Museum of Sex, 12 oz. Prophet notes that Lush had "chocolate popsicles in the shape of [his] cock" handed out to attendees, saying, “The meaning is the whole art world could suck my dick." They added that it was unclear if "the artist has anything up his sleeve" for his solo show on Saturday. With all that in mind, check out this video has popped up, filmed at the opening. It shows another graffiti writer bombing Lush's work.

One attendee Tweeted that the "dude got chased out before he could do more," but is it possible that this was all part of the plan? So far Lush has only Tweeted in response to one of his followers, who wrote, "I have an old school writer friend in South Bronx, may call him up to tell the kids to treat you not too harsh!" He replied with the above video link, asking, "Was this your boy?"

We've contacted the gallery to find out if this was a planned stunt or if they found out who the vandal was. Maybe this is what the Vandal Squad should have been used for—getting to the bottom of mysterious bombing beefs.

UPDATE: Pierre and Victor at Klughaus tell us: "I have to laugh off the whole situation although it was a bit disrespectful to the gallery. I hear that only a couple of pieces were damaged the rest only needed new frames. We definitely don't want to encourage this kind of behavior in the future. This was definitely not planned by us and we have confirmed with the artist LUSH that he did not plan this as well. In any case, a police report will be made this week and we'll let the 5th precinct take over from there."