Video: How I Met Your Mother Revisits Hurricane Irene 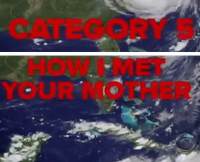 Last night How I Met Your Mother traveled back to August 26th, 2011, "as Hurricane Irene was barreling towards New York." You can watch the full thing here, but grab your duct tape and jugs of water, this is a Category 5 How I Met Your Mother, at least, that is what they called it. (Is that "too soon"? After all, this storm did force former Skid Row frontman Sebastian Bach out of his New Jersey home.) While we're huge fans of the show, we have some suggestions about how this episode could have been more realistic:

Though, bonus points for using The Pixies highly underrated Doolittle song "Hey" at the end... even if we may have gone with "Stormy Weather."

#how i met your mother
#hurricane irene
#television
#tv
Do you know the scoop? Comment below or Send us a Tip