The first teaser trailer for Avengers 2.5: Captain America: Civil War: Maybe We Should Also Include Iron Man In This Title Somehow?: Age Of Ant-Man was unveiled on Jimmy Kimmel Live last night. The glorious hero-on-hero fighting has left fans gasping for air (in a good way!) and asking all the important questions: are Bucky and Cap gonna kiss? What does Will McAvoy think about all this? Did this trailer kill you off?

But there's one important person who wasn't featured in the trailer whose absence left us gasping for air in a BAD way. Bucky and Cap fanfic come to life? Check. First look at Black Panther in action? Check plus. Guy who maybe is wearing red in the far background of a shot of Falcon and might be our first look at teen Spider-Man but probably isn't? Groovy. Itsy bitsy glimpse of Martin Freeman's mysterious character walking? What a gait. But here's the really glaring omission which is eating us up this morning:

Civil War Couples Who SERIOUSLY Need To Get A Room https://t.co/POCLS8mdHj

me watching the civil war trailer but then realizing ant man wasn't in it pic.twitter.com/vEI0VP6YuC

WHITHER THE ANT-MAN?!? I thought we all agreed that last summer's totally acceptable, absolutely adequate Ant-Man movie starring Paul Rudd was the moment when society would stop taking massive dumps on the Man who controls Ants. He has his own film franchise (the sequel has been green lit, for chrissakes), he's not supposed to be the Rodney Dangerfield of superheroes anymore! 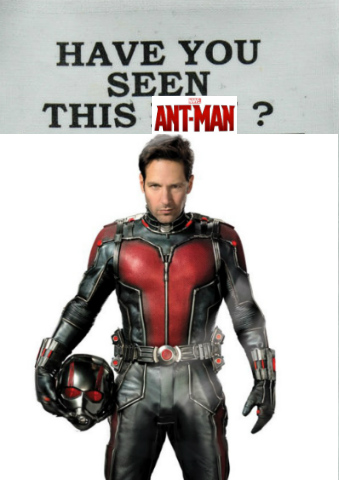 I spent two hours pinning this flyer around my neighborhood

We know he's in the movie, thanks to early reports about the film from the D23 Expo—it's especially strange because one of the much praised highlights of that footage was Ant-Man meeting Captain America and being a total fanboy ("I know you know a lot of super people, so thanks for thanking of me....Thinking of me."). So what's the deal? Has Ant-Man been written out of the movie? Has he been digitally removed from every scene? Do we need to launch an investigation?

Ant Man's in every shot of that Civil War trailer.

me trying to find ant man in the civil war trailer pic.twitter.com/IUDGquIb2J

My reaction to people claiming this is Ant-Man in the Civil War trailer. pic.twitter.com/QvOONMIMrq

Some monsters have been spreading rumors/fake photos showing a teeny tiny Ant-Man resting on Captain America's shoulder in a few shots. DO NOT BELIEVE THEM. DO NOT RETWEET THEM. They are false prophets. If you know these people in real life, shun them. Cast them out without bread. He that is without Ant-Man among you, let him first cast a stone at [the person spreading malicious Ant-Man rumors].

If you missed @AntMan in the @Marvel trailer for #CaptainAmericaCivilWar... I found him. You're welcome 😉. pic.twitter.com/Le4JDujUXS

For what it's worth, Ant-Man isn't the only character missing from the trailer: also MIA are Vision, Sharon Carter, Crossbones and Baron Zemo (and Spider-Man, probably). We know we're taking this really hard, but we thought we were past this, as a society. The blatant disrespect for Ant-Man is just too much sometimes.

At least we have this exclusive clip from the film to tide us over:

#all the ant-man content that is fit to print
#ant-man
#avengers
#civil war
#marvel
#movie
#superheroes
#trailer
Do you know the scoop? Comment below or Send us a Tip