The West Side stadium in Forest Hills, former home of the US Open, has seen its fair share of musical history. From Bob Dylan to the Rolling Stones to (regretfully) Mumford & Sons, the stadium has played host to a variety of different acts, all within a residential setting just a few blocks from the Queens Blvd. express trains. But for the first time in its history last night, the stadium played host to a rap concert, featuring not just any rappers, but possibly the two largest stars in hip-hop today.

The two-and-a-half hour set by Drake and Lil Wayne (billed as Drake vs. Lil Wayne) featured the artists gleefully alternating ten minute sets, in a concert that supposedly pit them against one another. While the premise was a bit contrived, it was clear from the onset that the two friends were out to have a good time, even if, by order of the neighborhood, the show had to be over by 10 p.m. 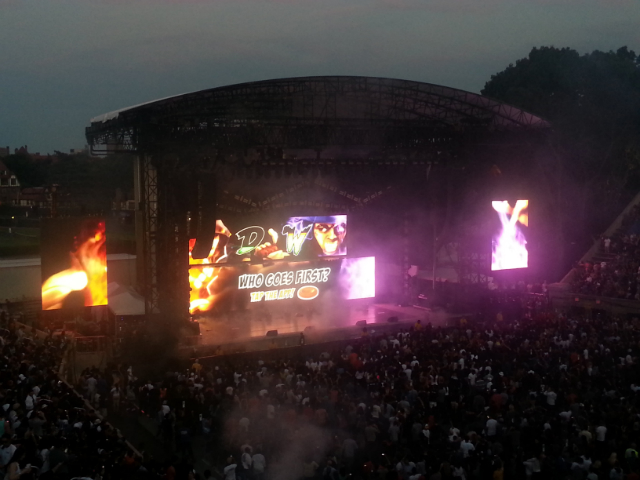 The stadium at dusk. Note the tennis players in the background. Forest Hiiiiiiills.

Lil Wayne started the concert strongly, prancing across the stage, seemingly far removed from his near-death experience last year. Looking healthy (well, as healthy as Weezy gets), Wayne started with some of his mixtape cuts before proceeding to rattle off pretty much all of his radio hits (even the shameful singles off of his "rock" album).

Compared to Lil Wayne's candor and coolness, Drake seemed kinda corny. Floating through the crowd on a pedestal, Drake showered compliments on the fans, all while seeming oddly stiff. Still, his songs were newer, more beloved, and when it came to actual voice performance, far superior. He also performed one song in front of a clip of a Brooklyn Net getting hit in the groin on repeat. For the Queens crowd, this was appreciated. 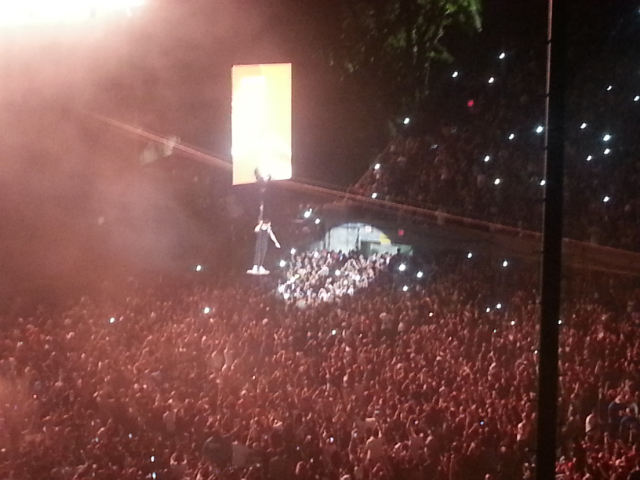 "This is a residential neighborhood, and they don't want to hear us, so for this last song," Drake told the audience. "I want you to scream as much as possible."

The residents of Forest Hills aren't delighted about the return of concerts to the stadium, which languished for almost thirty years in a state of deterioration, before a well-received test concert last summer led to a series of concerts this year. But based on the accessibility, as well as the pretty outstanding capacity and sight-lines and just generally pleasant atmosphere, the stadium seems to have a future once again as a great New York City venue.