Video: Dead Crabs Left On The Subway Weren't So Dead After All

This weekend, a straphanger came upon an empty train car filled with dead crabs. Ever since, we've been trying to piece together the whats, whys, and for reals? of how an N train car ended up filled with 50 or more crabs Saturday night. While there's still no explanation for why they ended up there, we have at least peeled back the onion a bit on a few aspects of the strange sighting—like the fact that crabs were still alive when they were first dumped there.

Park Slope resident Brian Slepian, 24, got on the arthropods express around 10:45 p.m. at 45th Street when he came upon the crabs, and he was able to shed some light on why there was so much water on the ground: "The guy throwing the water told me it must have been a prank against him since he was a Cancer and that it must have been done by a Scorpio (he did not know that I was a Scorpio). As if that train ride could have been any weirder."

And as you can see in the video below, they were still alive at that point in the evening. "He came on the train after I did and, in a psychotic attempt to help the crabs, threw a liter of water onto the floor," he added.

Astoria resident Shawn Petcaugh, 24, told us he was waiting for a train at Queensboro Plaza around midnight while on his way home from the Mets game when he came upon the otherwise empty crab car. "We all figured it was a horrid smell," he said, "but when we started walking past the car to get to the next one, we looked in and spotted an extremely odd sight... about 50 dead crabs. How? Why?" 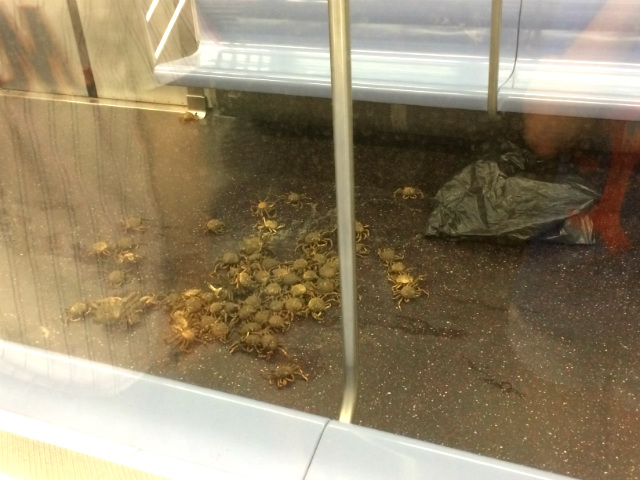 Based on the photos we have, the crabs appear to be either spider crabs (which are generally considering inedible, but seem to be a popular species for aquariums) or mitten crabs (which are edible, and can be bought in Chinatown). Or maybe this was just viral marketing for this kid's one-man crab show.

We've contacted the MTA for any other info about the crabs, and what people should do in the future if they come across a crustacean-filled subway car. If you have any other information about the mysterious crab train, email us ASAP.

#dead crabs
#nightmare subway rides
#subway
#subway videos
#train
#why
#original
Do you know the scoop? Comment below or Send us a Tip