Today, the Bronx Zoo heralded its baby okapi, which was born five months ago, after a long, painstaking animal husbandry process. Okapis, who make their home in Congo's rain forest, are "giraffid artiodactyl" mammals—a child described one as a "zebra horse" in the NY Times, due to their half-striped bodies but they are more closely related to giraffes—and they are very close to being endangered.

The Wildlife Conservation Society, which runs the Bronx Zoo, explains that the process requires a lot of patience, from making sure pairs of okapis are comfortable with each other enough to breed to getting okapis comfortable enough to have staffers give the female okapi ultrasounds. And then, if they are lucky, waiting for baby takes a while!

The average gestation for an okapi is 14.5 months. During pregnancy, vets, curators and keepers carefully monitor the development of the fetus through continued examinations. Once the expected due date nears, the female’s stall is prepared with additional bedding. Conditions are kept calm and quiet in anticipation of the birth. Closed-circuit video cameras send images to a computer in another building allowing keepers to remotely monitor the birth, maternal and calf behavior, and the frequency and duration of nursing bouts.

Upon birth, the mother and the calf are allowed time to bond. Unlike what would be normal practice for other ungulate species, a neonatal exam is not performed and the calf is not weighed because the species is very susceptible to stress.

Okapi calves are unique in that they do not defecate for four to eight weeks after they are born. In the wild, this a natural defense that limits the amount of scent that could attract predators while the mother leaves the calf to feed. Zoo-born okapis exhibit the same behavior; and early defecation can be an indicator of health complications. 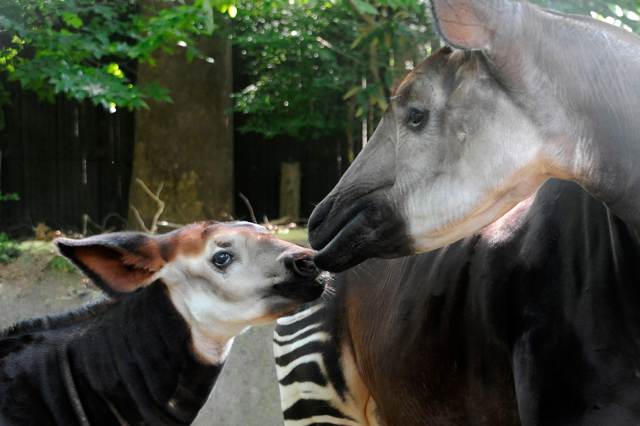 Photograph of the okapi calf by Julie Larsen Maher © WCS

The NY Times also has a look at the WCS's animal husbandry program for okapis and efforts from other zoos. And M’bura, the okapi born this past summer, is on view intermittently as she needs to get used to her surroundings (she won't be out in bad weather either). You can see her at the Bronx Zoo, and also in this video: