Video: Being A Mermaid Ain't Easy. So I Went To Mermaid School

Cookie DeJesus has always wanted to be a mermaid. "I was nine or ten years old, I saw the movie Mr. Peabody and the Mermaid. I fell in love, and I had to be a mermaid," the 54-year-old Harlem resident told us one sunny day in July, while lounging on the Coney Island beach in a sparkly bikini top and matching tail. "It’s a freedom, being in the water, and you’re one with the sea. There's nothing like it." But for most of her life, DeJesus had to contend with being a mermaid alone, through her computer screen.

"I used to Photoshop myself as a mermaid with a fish. That’s as far as I thought it would go," she said. "I thought it was just going to be a phase of mine."

Then, DeJesus found the Mermaid School, which is part of the World of Swimming, a Michigan-based swimming program run by national swimmer Elena Nannoshi. Though the school is primarily set up as an engaging way to teach children to swim, Nannoshi offers mermaid classes in Detroit and, occasionally, in New York, for adults. "I saw [the website] and thought, 'Is there actually a mermaid school?'" DeJesus said. "I reached out to Elena and I told her who I was, that I wanted to inspire little girls to become mermaids and that they can be a mermaid no matter what size, what shape, how old. And Elena said, 'Sure, come on down.'"

DeJesus showed up at a pool in her tail, made by her husband Ralph (her "mer-wrangler,'" as she calls him), and learned how to swim with it on, a move more difficult than it looks. She learned how to turn properly, and how to breathe. "I’m asthmatic, and I have a lot of health issues," DeJesus said. "When I swim, I have no more pain. I don’t take any medication for my breathing." 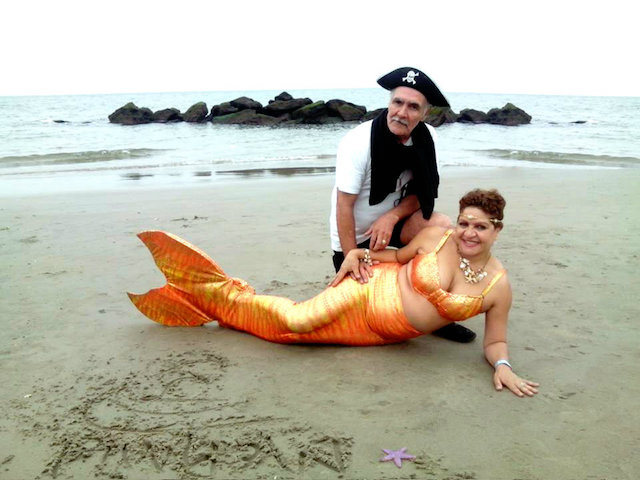 It turns out DeJesus, now known professionally as the Harlem Mermaid, isn't the only one out there who dreams of being Ariel in real life. In fact, according to a 2015 Fortune article digging into the "mermaid economy," there are about 1000 women and men who consider themselves professional mermaids. Merle Liivand, a 24-year-old Estonian National swimmer who recently tried out for the Rio Olympics, is one of them—she's an instructor with Nannoshi's mermaid school, and launched her own mermaid tail and fin company, SWIMERA, back in Estonia. She says mermaid instructors help teach kids how to be safe and brave in the water.

"We have a saying that 'mermaids never lose sleep over shrimp’s opinions,'" she told Gothamist. "As an athlete, I was always kind of scared by sports, but I learned by mermaid swimming that we shouldn’t be scared, we should be who we are and embrace it." Because swimming with a tail is much harder than using your legs, Liivand believes children (and adults) become much stronger swimmers by learning with it, and develop stronger cores. "That’s what the mermaid swimming is all about. You’re learning how to swim, you’re learning how to use your body, you’re learning how to overcome your fear of water, and you learn how to become comfortable in your own skin and in water."

I joined Liivand, DeJesus, and a few other Mermaid School instructors and students on Coney Island last month as part of a two-day Mermaid Instructor Training event. (Cost: $375 for two days of mermaid instructor lessons, on the beach and in a swimming pool, though typically sessions run $150 for 5 lessons.) Here, I found myself on a very hot, very sweaty beach for a Mermaid Yoga Class—led by Head Michigan Mermaid and World Fin Swimming champion Kristina Novichenko—with three people trying to help me pull a tail over my thighs as a bunch of creepy men took photos.

It turns out mermaiding is incredibly difficult—it takes a significant amount of core strength and balance to move your body with a tail on, plus a certain self-confidence to be able to ignore all the people laughing at you while you wiggle around like a half-fish person. 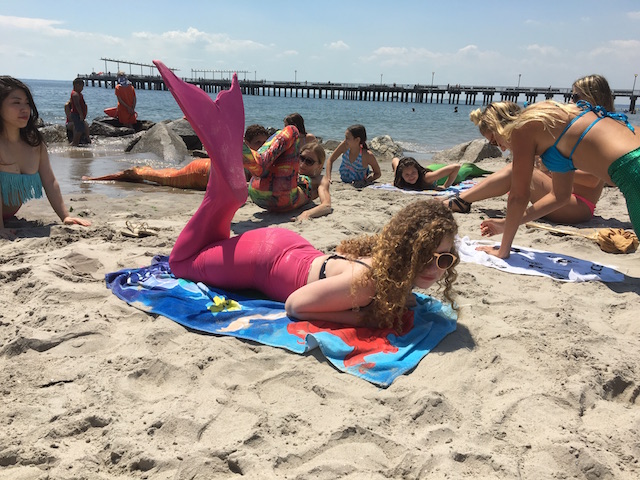 If I thought fifteen minutes of Mermaid Yoga was hard, I can't imagine the strength it takes to perform as a mermaid in water. Such is the life of the mermaids at Weeki Wachee Springs in Florida—the tourist attraction has been putting on underwater mermaid shows since 1947, paying college students $15-an-hour to act out The Little Mermaid and other merstories in tails and fins. "We're kind of like the mecca of mermaids," Weeki Wachee spokesperson John Athanason told us in an interview. "Most of the mermaids that we have today have grown up in the area, and came here when they were a little girl. They wanted be a world famous Weeki Wachee mermaid when they were growing up."

DeJesus isn't quite as accomplished as the Weeki Wachee mermaids, but she has carved out a mercommunity here in New York, gathering with her pod on Coney Island at least once a week. One merfriend, Mermaid Mandi (real name Mandi Saninocencio), traveled from Hudson Valley, NY to the Mermaid Parade this year to meet up with DeJesus & Co. She uploads mermaid videos to YouTube, and says finding a real community has made it easier to battle hateful Internet commenters. "When I first started becoming a mermaid, when I made my first tail, people would send me mean and hurtful messages and comment hurtful things on my videos," Saninocencio, 26, told us. "They'd say I'm too fat to be a mermaid, that I'm a whale." DeJesus "inspired me to grow more as a mermaid than anyone else," Mandi said. 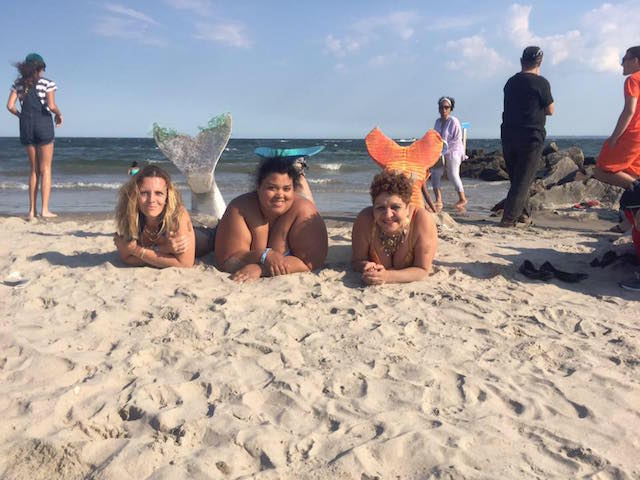 Still, both DeJesus and Saninocencio say the important thing about being a mermaid is feeling like an undersea siren, no matter how other people think you look. "My favorite thing about being a mermaid is swimming in the ocean and wearing my tail. Being such a beautiful creature to protect the ocean, to keep swimming in it, it's a beautiful thing to be," Saninocencio said. "I think the mean commenters are just jealous because I became something beautiful."

As for DeJesus, becoming a mermaid taught her how to feel strong and confident, both in her fish and human bodies. "It helps me be me, to be free," she said. "No hangups, I don’t think about whether I’m fat, I’m skinny, I’m just a mermaid. And as a mermaid, I feel beautiful."

#coney island
#gothamist films
#how to be a mermaid
#mermaid
#original
Do you know the scoop? Comment below or Send us a Tip