Lawyer Susan Kellman has a high-stress job, representing the likes of Somalian al-Shabaab fighters, Bloods gang leaders, and mobsters in federal court. So at her office in Park Slope and her apartment across Prospect Park, she keeps dogs around to help her unwind.

"I get great joy from them. They’re just so loving," Kellman said in a recent interview with Gothamist. "And they get me out. It’s easy, when you put in 20 hour days... it’s very easy on the weekends to not get up. But the minute I get out into the park I say, 'I can’t believe I wasn’t thinking about getting outdoors.' I just love being a dog owner." 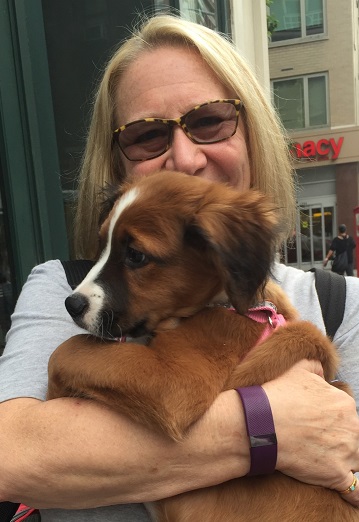 Kellman's latest canine companion is a boxer-Australian shepherd mix named Nash, whom she adopted in June from a kill shelter in Nashville, Tennessee, through a rescue organization called PupStarz. The pup was nine weeks old when he arrived in Manhattan in a van packed with dozens of other dogs headed for new homes.

At the time, Nash was named Benjamin, and when Kellman went to retrieve him with her daughter, Mia, he was huddled in a crate with another puppy they had considered adopting, Benjamin's sister Benita.

"I took particular note," Kellman remembered. "I said to my daughter, 'This is the last chance, do we want a male or a female?' We took Benjamin."

Over the next several weeks, Kellman incorporated Nash into her routine, taking him out to Prospect Park for a few hours early in the morning, and, schedule permitting, to her office where she has a dog space set up, then paying the park another visit in the evening. On days when she had to appear in court, she would leave the dog with Mia, and some days she would take care of Mia's dog Nola, a yellow lab rescue.

On July 31st, a Sunday, Kellman was out with the two dogs in the Long Meadow in the middle of the afternoon, the ground still wet from midday rain showers, when something caught Nash's eye. Here's Kellman recounting what happened next:

I’m just walking through the park and he starts to pull and pull—that’s not unusual for a puppy. Usually I give a quick jerk back and it’s fine. But he kept pulling. I offered him a treat, and he pulled again. I wasn’t holding on that tight, and he just pulled away from me and started running. He’s never run off the leash before.

He ran probably about 100 yards... and ended up on this blanket and just jumped on top of this puppy... I couldn’t tell what the hell was happening. But when I got close, it was so clear that it was the other puppy. Aside from a few markings that you can see close up, you can’t tell them apart.

Kellman turned to the dog's owner and said, "'That’s Benita, right?' She looked at me like was crazy." Kellman explained herself, and the two new owners talked as their puppies wrestled on and around the blanket for 20 minutes, gleefully unaware of anything outside themselves (to the chagrin of Nola, who is protective of Nash).

Benita, it turned out, had been adopted by the other woman in the park, a middle-school teacher who lives in Crown Heights and had renamed her Hazel Nut. The teacher walks Hazel Nut in the park regularly, too. Neither could believe what they were seeing. 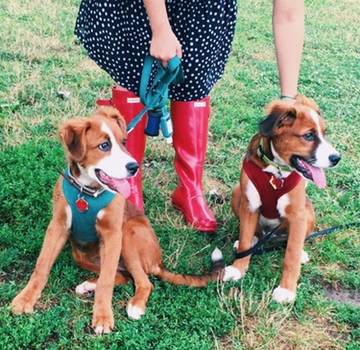 "It was hard to pull them apart. They just looked like they could play for the rest of their lives," Kellman said.

"They came from the same litter, and of all the places in the city we live about a mile apart," the teacher wrote in a Facebook post recounting the reunion.

The two exchanged contact information and hope to plan more play dates for the happy dogs. Kellman's daughter and the teacher posted photos and videos of the encounter to Facebook. PupStarz got wind of the reunion, and offered to put the rest of the owners of puppies from the litter in touch via email. Some gushed that they too are in New York City, and one in Connecticut put out an open invitation to any litter-mates who may be passing through the area, Kellman said. Within days, someone had created a Facebook group for the owners to track the goings-on of the fast-growing separated siblings.

In the meantime, Kellman has continued her routine, visiting the condemned in prison, taking calls from distraught relatives and pitiless prosecutors, sifting through the facts of the most terrible moments in people's lives again and again with clinical detachment, then heading out and playing with the dogs. And these past few weeks, she's been telling everyone she knows about her fateful walk in the park.

"It was one of the sweetest things I’ve ever seen in my life," she said.