On Halloween, we were lucky to meet Harry, a six-year-old Upper East Side resident who uses a wheelchair and loves the MTA so much, his parents built him an M96 Crosstown bus of his own to wear (the year before, he dressed up as the Q train). "Getting around the city can be challenging at times with the lack of accessible routes, but while most people would find it an inconvenience, he sees it as an adventure!" mom Jasmine Tay told us. The MTA took note of our story, and reached out to get in contact with the family.

On Friday, NYC Transit chief Andy Byford took Harry and his parents Jasmine & Brendan on a tour of the Casey Stengel Bus Depot and the 7 Train maintenance garage in Flushing, Queens. Byford told Gothamist that Harry's costumes "melted our hearts, and we immediately said we must do something for Harry. He's a transit fan, I'm a transit fan, we're going to lay on a special event for him, and this is what today's all about," he said. "He won't forget today."

During the two hour tour of the bus depot and train maintenance station, Harry also got to see how buses are cleaned (in the "bus hospital"), and they gave him a ceremonial promotion to Assistant General Manager for the day, as well as a bunch of MTA swag. That included a hard hat with his name on it, a map of the train system, a copy of the Fast Forward plan signed by Byford ("I don't want to see it on eBay" he joked), and more.

"He was so excited all week," Harry's mother Jasmine said. "And this is such a nice, happy story, and a really good opportunity to raise some awareness about accessibility, to really bring it to life for people day-to-day. It's a reality for Harry, so we need to work with what we've got." 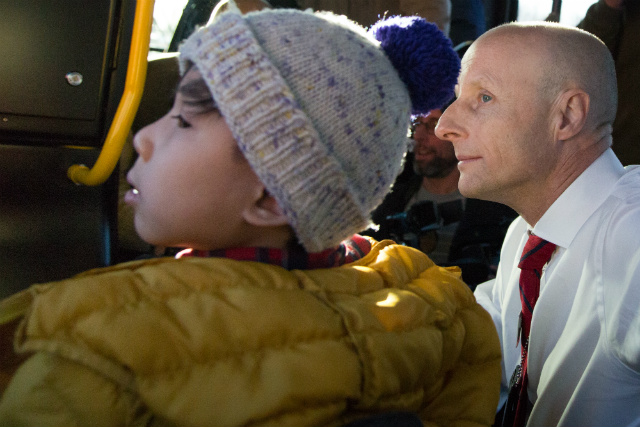 The MTA has an abysmal track record when comes to accessibility—roughly 80 percent of the city's 472 subway stations are inaccessible to people with disabilities, and half of the city's neighborhoods are "ADA Transit Deserts" that lack a single subway station that is accessible. The MTA has also faced multiple lawsuits arguing that they're not doing enough to maintain elevator service or make more stations accessible.

But Byford has made accessibility something of a priority in his ambitious Fast Forward plan to fix the system. In the next five years, he wants the MTA to install 50 new elevators at stations so that every subway station will sit within two stops of one that is accessible.

Alex Elegudin, the MTA's new Senior Advisor for Systemwide Accessibility who also joined for Harry's tour, is confident these improvements will happen, and Harry will have better access in the future than there is now: "I'm 100% confident, because I know when I was his age it was much worse than it is today."

"Transit has a bit of a stuffy image, maybe a bad reputation, so we're trying to show there's a human side to what we do," Byford said. "At the end of the day, we're either native or adopted New Yorkers too, so we want to do our bit for the city and kids like Harry."

"And certainly it's the most fun part of my week. I've had a very busy, arduous week...so after what's been a manic week on planet NYCT, it's nice to end with a real happy occasion." 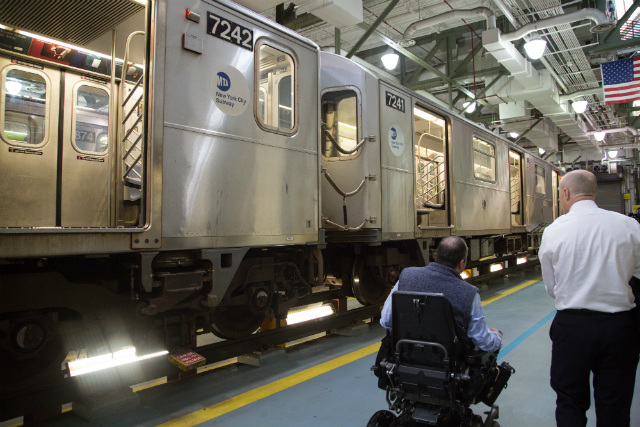 Byford was referring to a tumultuous week in which he made an impassioned case to the City Council's Transportation Committee to bite a $40 billion bullet to fund the Fast Forward plan. He was also heavily criticized this week for comments he made blaming some of the MTA's financial woes on fare evaders and saying he would think about stationing MTA employees at entrances to deter anyone who might be thinking about jumping a turnstile.

"Anyone who uses the transit system day-in day-out, same as I do, we all know it goes on, it's not unique to New York, and we can't ignore it. It's not fair on the majority of New Yorkers who do pay their fares, so we are clamping down on it," Byford said about farebeaters. "Having said that, we do know there are people who are less able to pay their fares, so we are working with the city and the Fair Fares campaign to get cheaper fares for those who need it. But equally we're sending a strong message: if you use transit, it's only right, you have to pay your way."

On the subject of accessibility, Byford said the MTA has surveyed 150 stations to determine which 50 need elevators in order to meet their goal. "What we really want to do is involve the accessibility community against a range of selection criteria to help inform that choice," he said. Selection criteria includes demographics (is it close to a hospital, or do a lot of older residents live nearby), whether it's an interchange station, how long a stretch it is between stops, and how complex it will be to build at the existing station. "That's our objective: no more than two stops between accessible stations within five years. That is light years from where we are now, but it's within our grasps."

That seems of a kind with Byford's attitude about the drastic changes the MTA desperately needs to make. As he told Harry at one point during the tour, "anything is possible. That's my motto in life." He is an optimist, and despite the fact many commuters hate the MTA with a passion, he's hopeful that people have noticed "a lot of behind the scenes activity is happening, and it's good foundations for next year when we really start to see the benefits kick in." The biggest priority for 2019 is getting funding for the Fast Forward plan "in parallel with an ongoing relentless focus on basics, to continue to drive up the existing service. Because I don't want to give New Yorkers the impression that you have to wait five years or ten years for Fast Forward." 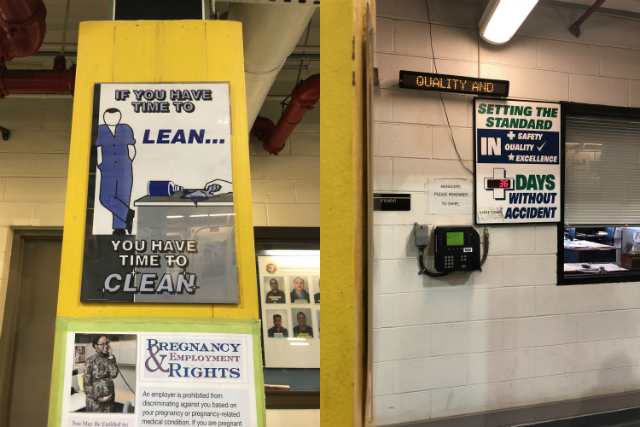 Was he worried about pushback from NIMBYs and local communities who might object to loud renovations disrupting their subway stops? "Absolutely—we know we can't just impose things without consulting the community," he said. "We will still consult the community. But we need it to be fast tracked. If we grind to a halt with every elevator installation or every subway installation where people say, 'we don't want that, you're not getting in there,' then Fast Forward will never progress."

As for the funding, we asked whether he supported recent calls by City Council speaker Corey Johnson and others to use tax revenue from marijuana legalization to help the MTA: "I'm agnostic on where the funding comes from," he said. "There's lots of ideas flying around about how to fund transit, all I know is we need sustainable, predictable, affordable funding. I'll leave it to the legislators to come up with the money, but I'm certainly asking for it. We need a big chunk of money. I'm not going to say no to any source of funding, as long as it's lock boxed for transit."

In the meantime, at least one sweet kid who unabashedly loves trains and buses got a glimpse of a better future: "Harry had a blast," his mom told Gothamist a day after the event. "He insisted on sleeping with his hard hat on his pillow next to him and he just called out sleepily, 'Mom, this was the best day ever.'"

#accessibility
#andy byford
#barts people
#best costume ever
#harry
#MTA
#original
Do you know the scoop? Comment below or Send us a Tip