Video: A Rare Glimpse At The NYPL's Sylvia Plath Treasures

Tucked away in a corner of the New York Public Library is the Berg Collection, which holds many treasures, including original writings and items belonging to Dickens, Twain, Woolf, and Kerouac, amongst others. But there's also a small stash of Sylvia Plath items: her sketches and poetry from when she was a child, a postcard to her grandmother, drafts of "Brasilia," a letter to literary critic Alfred Kazin, and books that she read and annotated.

In the above video, featuring the NYPL's Isaac Gewirtz, flip through Plath's heavily inked-up copy of T.S. Eliot's Four Quartets and get a rare look at these items, which aren't on public view and haven't previously been visually documented. 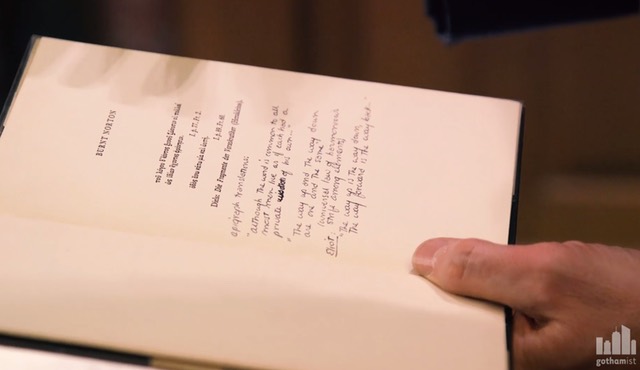 Previously: An Extremely Rare Look At Sylvia Plath's Childhood Manuscripts At The NYPL

#berg collection
#gothamist films
#isaac gewirtz
#nypl
#sylvia plath
#original
Do you know the scoop? Comment below or Send us a Tip