Earlier this week, people were outraged to learn that the Vessel, the comically-oversized pine cone inside Hudson Yards that is basically solely designed for selfies, had made an overreaching rights grabs for your content. According to their Terms & Conditions, simply by visiting the Vessel, you would be granting the Vessel the rights to use all of your Vessel content in perpetuity (and for commercial purposes). But after the backlash, Vessel has now drastically changed the Terms & Conditions to reverse that extreme policy.

"It would have been so much simpler and avoided all the negative publicity had someone thought about the original overreaching and unnecessary rights-grab in the earlier Terms & Conditions," Mickey H. Osterreicher, General Counsel for the National Press Photographers Association, told Gothamist. "It just goes to show how important reading and understanding those terms are before agreeing to them."

Up until Tuesday afternoon, there were two notable and exceptional clauses buried in the Hudson Yards Terms & Conditions which stated that by creating, posting or uploading any content depicting or related to Vessel, they had the right and license to use your content however they saw fit in perpetuity. Likewise, if you merely appeared in a photo with the Vessel, they also assumed the right to use your name, likeness, voice, and all the rest for any commercial purpose they saw fit in perpetuity.

Here's the old language in full:

MY NAME AND LIKENESS. If I appear in, create, upload, post, or send any photographs, audio recordings, or video footage depicting or relating to the Vessel, I grant to Company the unrestricted, worldwide, royalty-free, perpetual right and license (with the right to transfer or sublicense) to use my name, likeness, voice, and all other aspects of my persona for the purpose of operating, developing, providing, promoting, advertising, and improving the Vessel or any other products or services provided by Company or its sublicensees (in either case, now known or later developed). I understand I will not be entitled to any compensation from the Company, its affiliates, or its business partners if my name, likeness, or voice is used in the Vessel’s marketing and promotions, whether on Company’s website, social media channels, or otherwise.

MY CONTENT. If I create, upload, post or send any photographs, audio recordings, or video footage depicting or relating to the Vessel, I grant to Company and its affiliates the irrevocable, unrestricted, worldwide, perpetual, royalty-free, sublicensable, and transferable right and license to use, display, reproduce, perform, modify, transmit, publish, and distribute such photographs, audio recordings, or video footage for any purpose whatsoever in any and all media (in either case, now known or developed later). I further authorize Company to store such images on a database and transfer such images to third parties in conjunction with security and marketing procedures undertaken by the Vessel. Such usage and storage shall be in line with the Privacy Policy at all times. I will not exploit any photographs, audio recordings, or video footage of the Vessel for any commercial purpose without Company’s prior written consent.

In response to our report on Monday, a representative for Vessel told Gothamist, "The intent of the policy is to allow Hudson Yards to amplify and re-share photos already shared on individual social channels through our website and social channels. This is a practice utilized at nearly all major attractions and we wanted to over communicate, be transparent and disclose to all users. We are refining the language to be more clear."

Then on Tuesday afternoon, the policy had been suitably refined: the "Name and Likeness" clause was completely gone, the "Content" portion was changed to "My Social Media Posts," and the language was changed around to make explicit that people still retain "ownership" of their posts, and the Vessel only wants the right to "amplify and re-share" the photos, as they previously noted.

MY SOCIAL MEDIA POSTS. As between me and Company, I retain ownership of any photographs, text, audio recordings or video footage depicting or relating to the Vessel that I may create (the “Vessel Media”), unless otherwise agreed by me and Company. If I post any Vessel Content to any social media channel, I hereby grant to Company and its affiliates the right to re-post, share, publish, promote and distribute the Vessel Media via such social media channel and via websites associated with the Vessel or Hudson Yards (including my name, voice and likeness and any other aspects of my persona as depicted in the Vessel Media), in perpetuity. I understand that I will not be entitled to any compensation from the Company, its affiliates or their respective vendors in connection with the same. 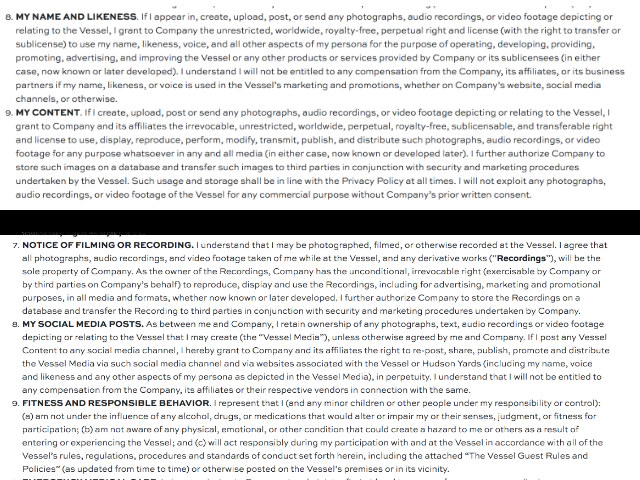 Despite the changes, civil rights attorney Norman Siegel, former executive director of the New York Civil Liberties Union (NYCLU), still said there were underlying problems with the language—and the fact that the social media policy and negligence clauses are not articulated anywhere on the actual site of the Vessel.

"I think the Terms and Conditions continue to be troubling, despite less legalese in the refinement of the language," Siegel told Gothamist. "However, most of the public will continue to be in the dark about the contents of the Terms & Conditions of the Vessel. I anticipate there's no way of knowing what rights most of the people are going to be giving up unless there's some sign, some flyers [at the site]."

"Only people like me actually read the fine print to see what's there, and it's often very upsetting," he added, saying he finds it "objectionable" that the Vessel still wants to be able to use people's content for commercial purposes without their explicit consent. 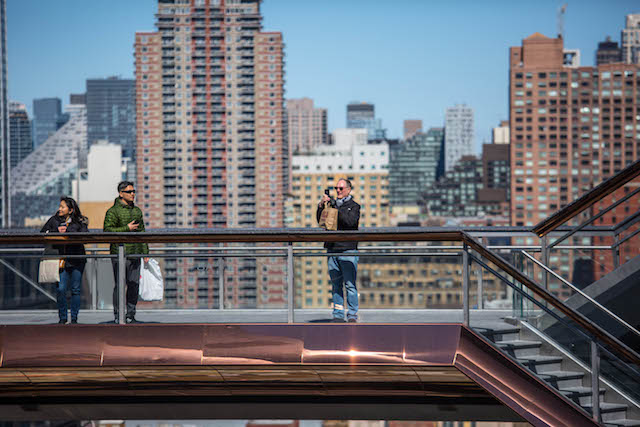 Siegel pointed out a few others clauses in the Terms & Conditions that concerned him, including the all-caps warning at the very bottom of the document that reads, "BY PURCHASING A TICKET TO OR ENTERING THE VESSEL, I UNDERSTAND THAT I AM VOLUNTARILY GIVING UP SUBSTANTIAL LEGAL RIGHTS, INCLUDING THE RIGHT TO SUE THE RELEASED PARTIES." If they are interested in transparency, he wonders why that kind of extreme language is being dumped at the very end. "Why are people having to release any negligence claims against others when they didn't engage in any negligence? And is that even enforceable?" he asked.

Also, paragraph 11 allows the Vessel to "search my person and belongings prior to my entry to the Vessel and at any time while I am on the Vessel premises." As he puts it, that is not a practice typically utilized by other major attractions: "In a lot of the facilities, sports arenas especially, there's metal detectors. So you go through a metal detector for security purposes, but once you're inside the facility, the language very often is "reasonable suspicion" for police officer or government official to search you. If I'm at MSG and I've gone through the metal detector and I go to get a hot dog at halftime and a security officer says they want to pat me down, I'd say no way! Why should private security have that. At a minimum, people should know that."

"I think that overall the troubling concern continues, and it does raise larger questions especially about urban development programs, whether the Vessel is a public art exhibit or something other," he said. "Again, the concern is that when these large companies and LLCs are getting public tax benefits or subsidies, there seems to be they should be as transparent as they can, and if we're going to continue down this road, perhaps elected officials should be putting in language that limits the erosion of public's rights, because the public generally takes some of these rights for granted."

Update: We asked Related, the company that represents the Vessel, whether they had any further comment on the updated language in the Terms & Conditions, and how people's social media content may be used in the future.

They responded, "The Terms and Conditions for visiting Vessel have been modeled after those used at similar local and national attractions. As we are a new destination, we wanted to over communicate, be transparent and disclose to all users that we may re-share select social posts on our social channels and website that visitors have already shared publicly on their social channels. This is a process undertaken at major attractions around the city and country."

They also pointed to the Terms & Conditions at places including Disney World, CN Tower, Six Flags, Coney Island's Luna Park and the National Museum of American History as examples of similar policies—however, only one of those places, Disney World, claims the unilateral right to use your social media content for their own commercial purposes (the others just claim the right to photograph/video/record people inside their parks).

#hudson yards
#norman siegel
#photography
#the vessel
#vessel
#original
Do you know the scoop? Comment below or Send us a Tip