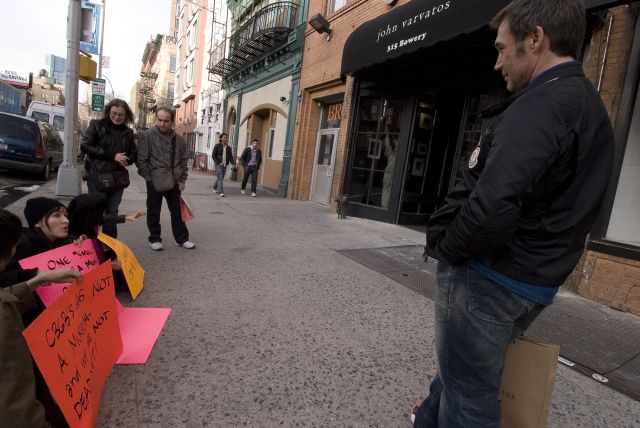 After the John Varvatos boutique officially opened its doors last weekend in the old CBGB space, activist Rebecca Moore held court on the sidewalk. This past Tuesday she sat outside the retail shop in protest with a sign that read: "One small loss of a music space, one large step for pants," and was joined by a few other supporters. Moore says her statement isn't about just one music space (CBGB):

"It's about Tonic closing, and Fez, Theater Club Nada and Charas...about Copacabana being forced from their space by the city using eminent domain. These are not abandoned dusty relics. These are places that still cater to strong and vibrant, burgeoning communities. They are being ousted by people creating a Disneyworld, expensive version of the real culture that was here."

"It would be great to see Mr. Varvatos not just stepping in to save a building he deems a shrine, and using that environment to help sell his clothing -- but rather actively petitioning the city to save and recognize local cultural arts and community spaces that have a rightful place in these neighborhoods! Mr. Varvatos caters to a wealthy, male-dominated major-label mainstream rock world that has no claim on the CB's legacy whatsover."

Well, except that at least one old punk rocker who played CBGBs is actually a Varvatos model now.

As for Varvatos, he said earlier this week, "We're not trying to reinvent CBGB's. We're just trying to respect the past and let people have an opportunity to enjoy what was there. It sounds kind of hokey, but the walls kind of talk in that place."

#cbgb
#iggy pop
#john varvatos
#protest
#Rebecca Moore
#retail
#Varvatos
Do you know the scoop? Comment below or Send us a Tip