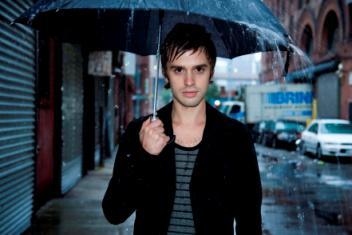 Though he's got his hands in just about everything, it's likely you know Val Emmich from his voice, or from him face. The singer/songwriter has done some acting, and currently plays the love interest of "Ugly Betty" (and surprise, his character is a musician!). If you'd like to see this in person, you're in luck, because the NJ-native is in town tomorrow evening at the Canal Room (tix), performing songs from his six albums (the latest, Little Daggers, was just released).

Was your first love acting or music? Music. Not only did I find music first but once I did, I fell in love instantly. It took a few years of acting to actually feel that I loved it. I think it has to do with control. With music, I'm writing it and creating the message. With acting, I'm a conduit for someone else's message.

How did you get in to each? I took piano and sax lessons briefly as a kid but it wasn't until I got my first guitar -- a cheap Yamaha acoustic -- when I was fifteen that I really started taking it seriously. That's because I started writing songs. Writing songs is the reason I love music. That sense of creation and communication. With acting, I completely fell into it, or rather was dragged by a friend who thought I should give it a try. She was right. I started going on auditions having never acted in my life and had some early success, landing a few national tv spots and getting a paycheck.

Is it hard to focus on them equally now that you are seemingly doing both? I make those decisions as they come, on a case by case basis. Whatever feels right at the moment. Luckily, at the moment, I don't have to choose because my acting job is directly promoting my new album. In the future it might not be so easy but I'll cross that bridge later.

How was performing on the roof for the recent Ugly Betty episode -- was that your own song? The rooftop concert was great. But cold. Both songs were my own and in fact the band was my real band as well. The first song -- the rock one -- is called Get On With It and is the single off my new album Little Daggers. The second one, Snowy Day, was a special song I wrote for the show.

Do your characters stand a chance at romance? Nothing is out of the question with that show. That's why I like it. I think although the relationship has gotten a bit rocky, it will eventually smooth out.

What can your fans expect from your live performance this week? A lot of songs from the new album plus a peppering of older stuff. They can expect the same thing as always. Energy, passion and spontaneity.

Who are some of your musical influences? The Beatles, Radiohead, Paul Westerberg, Superchunk, and a zillion other odds and ends.

What are you currently working on? Putting the final edits on my novel, my first one, and will begin pitching it soon. Other than that, working on Ugly Betty and promoting my album.

Please share your strangest "only in New York" story. I have just entered an elevator and am about to ascend upwards to my first real photo shoot. This was five years ago in the Chelsea Hotel. A hand comes through the closing doors to halt the elevator. In walks Ethan Hawke. He apologizes as he presses the button and we take off. Before he exits, he turns to me and says that he likes my pants. That's when I look at his and see that he has a giraffe stitched into his jeans. I thank him shyly and grin to myself as I exit the elevator and head to my photo shoot. Of course in my head I'm thinking "only in New York."

Being from NJ, have you dealt with a lot of flack from New Yorkers about your native state? Yes. Much of it is well founded but unfortunately some of it is naive and ignorant. It's smart to actually leave the city once and a while if one wishes to comment about the rest of the world and regretfully I meet many people who are just as out of touch as the people they claim to be above.

Which New Yorker do you most admire? Too many to count. Every influential person eventually takes refuge in New York. I wouldn't know where to start. I guess I'll just throw out Phillip Seymour Hoffman because I know many people who have spotted him and I'm waiting my turn. He's a force to reckon with. Someone whose work I greatly admire.

Given the opportunity, how would you change New York? I would make it cleaner. Particularly the subway system. You go to any other city and it's so much cleaner down there. I'm tiring of the smell of urine.

What's your current soundtrack? I haven't been listening to music lately. So I guess talk radio is my soundtrack.

Best cheap eat in the city. You can't go wrong with pizza. After traveling around the country, when you get back to New York, nothing is better than a good slice. Even a mediocre slice in NYC is better than the best slice anywhere else. I particularly like the pizza joint right across from Arlene Grocery on the corner. Forget the name [ed. note: Rosario's!] but late night it's always packed and with good reason.

Best venue in NY to see/play music. I love the Living Room. You get a seat and you watch an intimate performance by some amazing unknown songwriter.