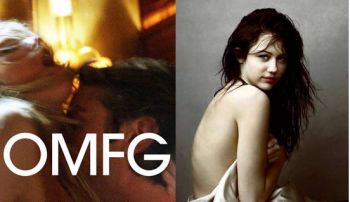 The NY Times visited the corner of 61st Street and Amsterdam to find out what New York adolescent girls at the alterna-Beacon School think of "role model" Miley Cyrus. Recently the 15-year-old actress was caught flaunting her bare skin online and in print.

While some of the young ladies were fans (or rather, they "love-hate" her), the Vanity Fair photoshoot had them blurting out words like "whore" and "slut". There is, apparently, a fine line between dressing "sexy," as they consider themselves to do, and dressing like you're eight seconds from ecstasy ("her hair damp, her back bare, a sheet draped over her front").

“Is this who we’re supposed to be growing up to be?” asked the young woman. She wore sunglasses, a tight baby-T and short shorts over black leggings. “I don’t want to be that,” she said. “It’s sending a message that girls are supposed to be whores.”

Ms. Leibovitz, in responding to criticism, expressed much the same sentiments, adding, by way of apology, “I am sorry that my image of Miley has been misinterpreted.”

Another 15-year-old said that she could totally, like, care less about this Hannah Montana chick — "she and her friends act and dress the way they do because those choices help them express themselves." She added, “I smoke. I made that decision myself — I didn’t see someone doing it in a magazine and say, ‘Oh, I want to smoke.’” She then ran home to slam the door in her parents faces and...OMFG! Shouldn't the watchers of today's youth be more worried about this Gossip Girl show?