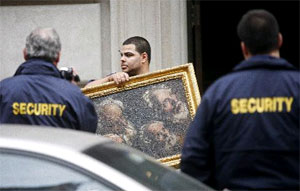 For the past few weeks, an art gallery has been locked down by judge's order as angry partners and clients claimed that the gallery sold their works without permission and that the gallery's owner reneged on millions of dollars of debts. And yesterday, a judge toured the toured embattled art gallery Salander O'Reilly to examine its conditions as many artworks are still hanging on the walls.

The accusations range from John McEnroe and other investors claiming they never got returns on their investments to the son of artist Stuart Davis claiming that $9.3 million worth of Davis' paintings were secretly sold. Lawrence Salander, who has also been accused of essentially running a Ponzi scheme, told the NY Times that the "[lawsuits were filed by] friends of mine or people I thought were friends, all of whom have always been paid for the pictures I sold for them. I’ve paid my bills for over 40 years in this business and I will continue to.” 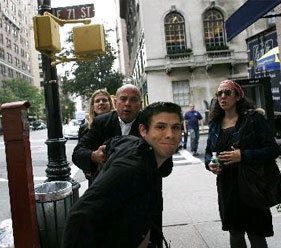 One of his lawyers said the lawsuits were taking "advantage of the gallery’s financial illiquidity" but admitted that Salander is "clearly not the best financial manager." Salander, who will likely filed bankruptcy, was forced to cancel a show of Caravaggios - a show was able to mount only after he gave up hundreds of artworks and rare art books in order to settle other claims - when his partner decided the works wouldn't be safe at the gallery and took them back. And passions have been so heated that Salander's son tried to attack a Bloomberg News photographer who taking pictures.

And interesting fact: One of the lawyers representing a bank that claims millions of debts were defaulted happens to be Barry Slotnick, best known for getting Bernard Goetz an acquittal.

Photographs by Bloomberg News; lower photograph shows Lawrence Salander trying to restrain his son from lunging at the photographer